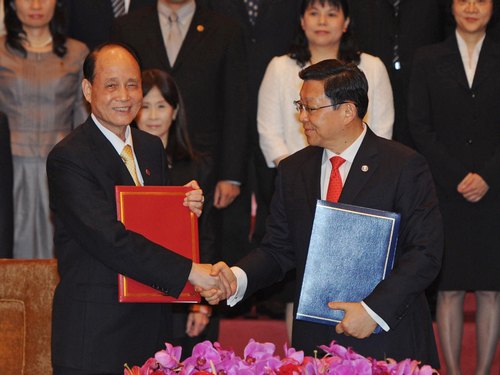 The service trade pact signed between Taiwan and China, which will allow Chinese films to have their post-production and processing done in Taiwan, is expected to benefit local firms from the cultural sector, a Ministry of Culture official said on Monday.

'China produces close to 800 films each year. It will benefit us if their post-production are done in Taiwan,' Chu Wen-ching, head of the Ministry's Bureau of Audiovisual and Music Industry Development (BAMID), told reporters after a press conference to promote Taiwanese films.

Asked about government measures to protect domestic films, Chu said the gradual relaxation of restrictions is a form of protection measure.

Taiwan has only relaxed its yearly cap on Chinese films from 10 to 15, while there are no restrictions on the number of Taiwanese films allowed to be released in China, Chu noted.

In response to criticism over China's film censorship system, Chu said the censorship does not target only Taiwanese films, but all films.

'Of course, we communicate with them each year through the ECFA (Economic Cooperation Framework Agreement) mechanism in the hope that they will make gradual changes,' he added.

In the service trade pact signed in Shanghai on June 21, China agreed to allow Chinese films to receive post-production and film processing in Taiwan, to allow films in Taiwanese dialects to be released in China, to let Taiwanese companies invest in theaters and concert halls and to simplify the customs procedure for Taiwanese publications seeking to enter China.

Taiwan, on the other hand, relaxed the annual cap on Chinese films from 10 to 15, and agreed to allow Chinese investors to obtain a stake of no more than 50 percent in theaters and concert halls in Taiwan.

The service trade pact was signed on June 21 in Shanghai by Lin Join-sane (left), chairman of Taiwan's Straits Exchange Foundation (SEF), and Chen Deming (right), president of the Beijing-based Association for Relations Across the Taiwan Straits (ARATS).