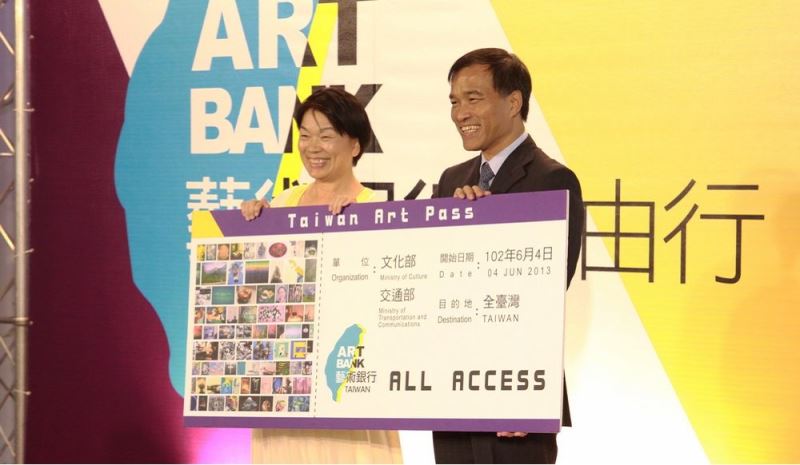 The Ministry of Culture and the Ministry of Transportation and Communications (MOTC) announced their partnership on Tuesday to promote an 'art bank' project that invests in and promotes Taiwanese artists.

The MOTC will provide 13 venues such as airports, train stations, seaport buildings and highway rest stops, to display works by the Taiwanese artists included in the project, Transportation Minister Yeh Kuan-shih said at a press conference held at the Taipei Songshan Airport.

Under the project, the Ministry of Culture will purchase artworks from the Taiwanese artists and sell or loan the pieces to companies, government agencies and the public to give the artists more exposure.

The project also aims to improve the environment in public spaces and promote appreciation and support for Taiwanese art.

So far, 855 artists have submitted over 3,200 works for review. The selected works will be announced in July and displayed in public spaces as soon as August.

Culture Minister Lung Ying-tai said the concept of 'art banks' has been implemented in other countries such as Australia, Canada and South Korea for years and will finally be launched in Taiwan.

She said, however, that the NT$35 million (US$1.16 million) budget for the purchase of the artworks is not enough and the 'art bank' project will only be able to select around 200 examples.

'Artists need to be seen by society,' Lung stressed, calling for investment and partnership from the private sector.

The Ministry of Culture also hopes to cooperate with the Ministry of Foreign Affairs so that the artworks can be shown in Taiwan's overseas embassies and representative offices. At a June 4 press conference held to announce a partnership with the Ministry of Transportation and Communications, Culture Minister Lung Ying-tai expressed her hope for future generations of Taiwanese children to be raised in an aesthetically stimulating environment.