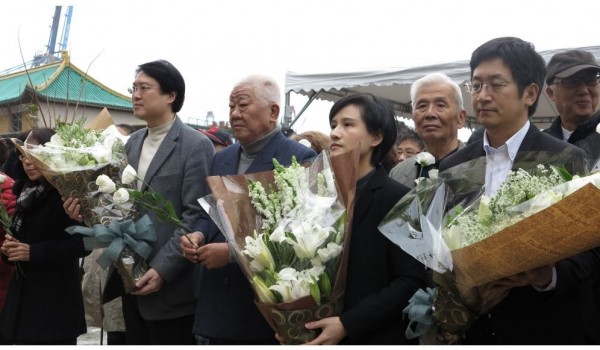 Culture Minister Cheng Li-chiun visited the maritime city of Keelung on Jan. 27 to attend the 69th anniversary memorial service of the 1949 Taiping steamer incident and learn about the progress of “The Tagana Story” heritage preservation project.

Keelung, a port city at the tip of northern Taiwan, has been open to the world since Spanish traders arrived and built Fort San Salvador in 1964. In 1841, the British army carried out an unsuccessful invasion of Keelung during the First Opium War. In 1884, the French was also defeated by Chinese and aboriginal forces in Keelung during the Sino-French War.

Having been occupied by Spanish, imperial Qing, and Japanese forces over the past centuries, Keelung has accumulated a rich history and developed a diverse culture. Today, the historical and cultural scenes have gradually integrated with local life, making Keelung a unique city in Taiwan.

Based on 400 years of recorded history, the Keelung City Government initiated the “The Tagana Story” project – after the original name given to the region by indigenous plains aborigines – to recreate the spirit of Keelung through reorganizing historical settlements and revitalizing regional history and culture with local spaces and the environment.

“The Tagana Story” covers a region from eastern and western coast of Keelung to Heping Island. The project will encompass the Sino-French War Memorial Park, Taiping Steamer Memorial Park, and Old Stone Wall of Dashawan and attached military compounds and dormitories to tell the history of Keelung and highlight its historical and cultural values.

The project has been approved and received a budget of NT$576 million from the Ministry of Culture, which is implementing the Executive Yuan’s “Reconstruction of Historical Scenes” initiative to promote urban and countryside development through strengthening the preservation and revitalization of historical memories and cultural assets.

Minister Cheng pointed out that the Ministry hopes to reinforce the governance of cultural space and bring cultural assets that were passed down for generations back to people’s everyday life for sustainable development. As Keelung is one of the cities that contain the highest density of cultural assets, the program will make the rich culture and history of Keelung a part of everyday life again.

As one of the most major incidents in Keelung’s history, the Taiping steamer collided with a cargo ship and sank near Zhoushan Archipelago on Jan. 27, 1949. Departing from Shanghai, Taiping was carrying about twice its capacity with over 1,000 refugees who were fleeing from China to Taiwan – the collision killed an estimated 932 passengers.

A monument commemorating the victims was established at Keelung Harbor in 1951. However, families of the victims had to apply for the military’s approval to hold memorial services as the location of the monument was part of a military compound.

Earlier this month, the Ministry of National Defense agreed to make public the region where the Taiping Monument is located to allow families and friends of the victims to enter freely. The Taiping Memorial Park was then established to house the monument and provide more background information to visitors.

The floor of the Memorial Park points to the direction of the Taiping Monument and Zhoushan Archipelago, and the grassy slopes were designed in the shape of islands to represent Taiwan and Zhoushan Archipelago. Trees that are often seen in Shanghai and Taiwan – including the Chinese parasol tree, gingko, Formosan gum, Oliver Maple, and oriental cherry – were also planted in the park.

The monument itself is accessible by a small lane paved with coral sand and gravel to represent the route of the steamer. Beach cabbage and bayhops were also used to evoke the scenery of a beach to memorialize the historical tragedy.