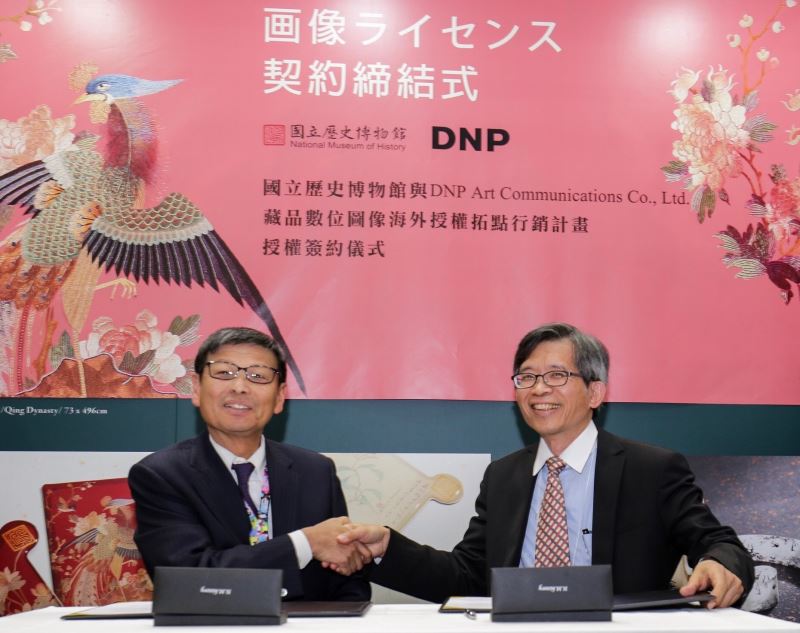 The National Museum of History (NMH) signed a licensing and cooperation agreement with DNP Art Communications Co., Ltd. (DNPAC), one of the world's largest digital reproduction companies based in Tokyo, on April 26.

Under the curatorial theme "Made in History, Made in Taiwan," the cooperation marks the museum's first licensing foray into Asia following its agreements made with France's RMN-Grand Palais and the Art Resource in the US in 2016.

Under the direction of the Ministry of Culture, NMH has been actively pushing for international merchandise licensing of the museum's archives and collections to revitalize valuable cultural relics through digital and technological applications.

Last year, NMH collaborated with Taiwan fashion brand Just In Case to utilize the museum's collection on a clothing line, which was later showcased at three major international fashion shows. The collaboration successfully brought the museum's products into overseas markets as well as attracted global attention.

Seeking licensing opportunities with Japan, NMH participated in the Licensing Expo Japan for the first time this year to showcase images of its unique collection. The museum was also invited to deliver a speech titled "Creating a Connection between Museum and Creativity" at the expo.

On behalf of Deputy Representative Kuo Chung-shi (郭仲熙) of the Taipei Economic and Cultural Representative Office in Japan and Director Chu Wen-ching (朱文清) of the Taiwan Cultural Center in Tokyo, NMH Director Liao Hsin-tian (廖新田) and DNPAC representatives signed the agreement at the museum's booth during Licensing Expo Japan.

Director Liao noted that the museum hopes to introduce Taiwan's national treasures and cultural relics to Japan, and build a long-term collaborative relationship with Japan's cultural and creative sectors. International licensing will enable the museum to cross geographic boundaries and move towards interdisciplinary exchanges in culture, he added.

Deputy Representative Kuo express hope for the cooperation between NMH and DNPAC to deepen the cultural ties between Taiwan and Japan and encourage more exchanges between the two nations.

DNPAC representatives said they look forward to collaborating with the museum and introducing the beauty of Taiwan's cultural relics to Japan through cultural and creative products, printed publications, and films.