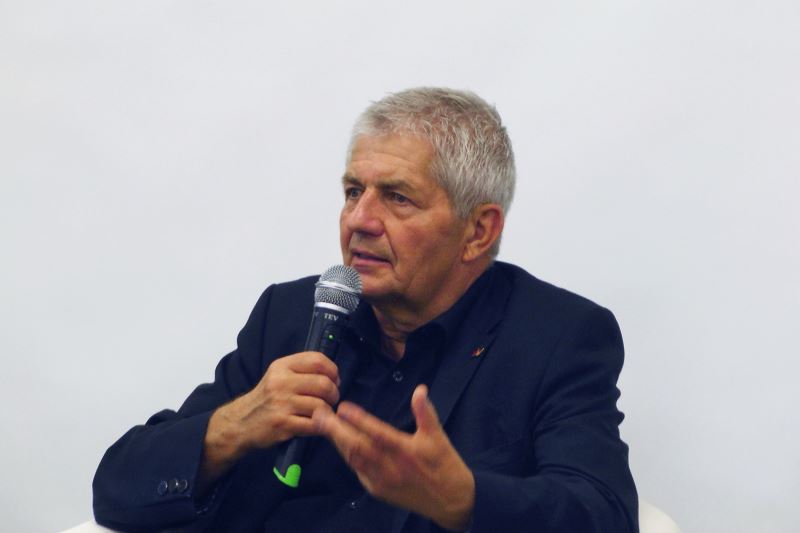 Germany's Federal Commissioner for the Stasi Records Roland Jahn and National Archives Administration Director Lin Chiu-yen (林秋燕) gave a talk on May 19 on the two countries' experiences with the collection and opening up of political archives.

Also invited to the event held at the newly opened National Human Rights Museum were 18 other scholars and experts, including representatives of Academia Historica and the Transitional Justice Promotion Committee, and a number of White Terror scholars.

In his speech, Commissioner Jahn explained that the purpose of opening up political archives is not only about determining the number of deaths, but more importantly, about recovering the stolen pasts of individuals and understanding the extent of the injustices committed.

Once we know the truth, he said, we can then redefine how we should get along with one another. While there is still work to be done on transitional justice in Germany, archives remain one of the crucial elements of elucidating and confronting the past.

When asked about how Germany has handled perpetrators of past injustices, Commissioner Jahn responded that looking at the situation as a simple dichotomy between "victims" and "perpetrators" is of little help in addressing the issue of accountability. He explained that the matter of identifying so-called "perpetrators" is much more complicated than one might imagine.

For example, the majority of informants may not have actually been part of the civil service, and so even if one can accurately identify someone as having been an informant, one is then faced with the question of whether they cooperated willingly with the government or were compelled to. Such details must be taken into consideration.

Jahn also offered his own perspective on the matter. He stated that his position was that while uncovering the mechanism by which injustices were committed is important, isolating the individual perpetrators from society through the legal system may not necessarily be the best way for both the individuals and society to deal with the situation.

A more fitting penalty, he continued, would be to have these perpetrators face the society and victims they hurt. This would force them to confront their own past mistakes and shoulder the responsibility for them.

At the same time, perpetrators must have the right to defend themselves, he added. Giving them this right would further drive home the vast difference between a democratic society and a non-democratic one, as well as promoting the possibility of public dialogue and mutual reconciliation.

Over the course of two and a half hours, Commissioner Jahn and the other guests engaged in a lively exchange of ideas. Chen Chun-hung (陳俊宏), director of the National Human Rights Museum, thanked Commissioner Jahn for sharing his valuable experience, commenting that Germany has been one of the most proactive and most successful examples of transitional justice in the world.

Culture Minister Cheng Li-chiun had visited Stasi Museum Berlin as part of her 2016 transitional justice tour of Europe, and Chen added that he looks forward to further opportunities for cooperation between the museum and the Stasi Records Agency in the future.