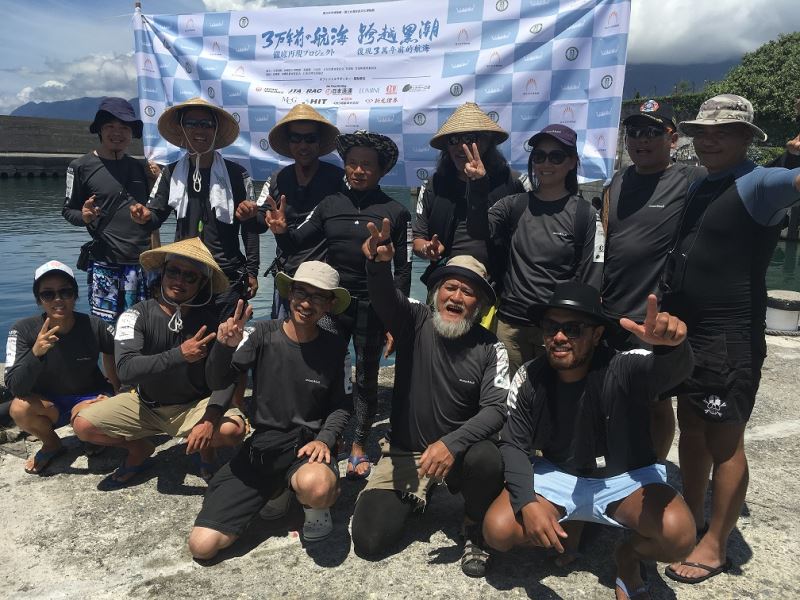 Taiwan-Japan cooperation has continued into 2018 with the "Navigating 30,000 Years Ago: Crossing the Kuroshio Current" project — an attempt to confirm the viability of a prehistoric marine route between Taiwan and Okinawa.

The project has already involved a year of research, adjustments, and revisions that has led, with the input of rowing experts, to the creation of a second bamboo raft christened the Ira 2. This craft is set to make an initial journey from Taiwan's east coast in early June, laying the foundations for a 2019 trip from Taiwan to Okinawa.

The raft's predecessor, Ira 1, was built by Amis craftsman Lawai (賴進龍). Composed of 11 massive bamboo poles fixed together by rattan, Ira 1 measured 11 meters in length and 0.8 meters in width, and weighed between 700 and 800 kg. After a trial run, project manager Yosuke Kaifu and the rowers all agreed the raft was too long and heavy, affecting steering and speed.

It was that experience that led to the remodeled 2018 edition, Ira 2. Built with seven bamboo poles and again fixed with rattan, with additional sand-burial treatment to strengthen it and protect it against termites, Ira 2 is 8.9 meters long, 1.2 meters wide, and weighs between 450 and 550 kg. Overall, it is shorter, wider, and substantially lighter than its predecessor.

The rowing team for the new trial hails from Japan, Taiwan, and New Zealand. The expedition will be led by Masahiro Uchida, an expert in kayaking and canoeing, while the rowers are Kouji Hara, Katsuaki Suzuki, and Saki Uchida from Japan; Taiwanese-Japanese rower Song Yuankai; and New Zealander Toiora Hawira.

Kaifu, head of anthropological research at Japan's National Museum of Nature and Science, explains that Japanese archeological studies have found three possible routes by which Paleolithic man may have made it to the Japanese archipelago:

(1) The "Tsushima Route," from the Korean Peninsula via the Tsushima Strait to Kyushu approximately 38,000 years ago;

(2) The "Hokkaido Route," from northern Eurasia via Sakhalin Island to Hokkaido and down through the Tsugaru Strait approximately 25,000 years ago;

(3) The "Taiwan-Okinawa Route," across the Kuroshio Current approximately 30,000 years ago.

In recent years, a succession of human skeletons from more than 20,000 years ago has been unearthed in Okinawa. As such, based on the distribution of animals, ocean currents, Paleolithic human remains, DNA from unearthed skeletons, and social behaviors, it has been estimated that humans have occupied the islands of Okinawa for some 30,000 years. There is a strong possibility that these prehistoric settlers found their way to Okinawa by sea from Taiwan.

This project began in July 2016 with the idea of setting out from Yonaguni Island and heading to Iriomote Island some 75km away using a grass-made concept prehistoric boat, but poor weather ultimately scuppered the attempt. In 2017, the Ira 1, constructed based on indigenous Amis methods, successfully made the 41-km journey from Taitung's Dawu to Green Island, crossing the Kuroshio Current.

Early this June, the amended and revised Ira 2 is expected to set off on a trial journey along Taiwan's east coast, from Wushibi in Taitung up along the Hualien coast to Yilan. The ultimate goal is a 2019 trip to Japan, traveling from Taitung's Changbin to Yonaguni Island. Japanese broadcaster NHK will also be airing a special feature on the project on July 8.

Through this project, Taiwan's National Museum of Prehistory and Japan's National Museum of Nature and Science hope to jointly work on interpreting research into the origins of the Japanese people and human migration in Asia, including a possible maritime link between the Changbin culture of prehistoric Taiwan and the people of Yonaguni.