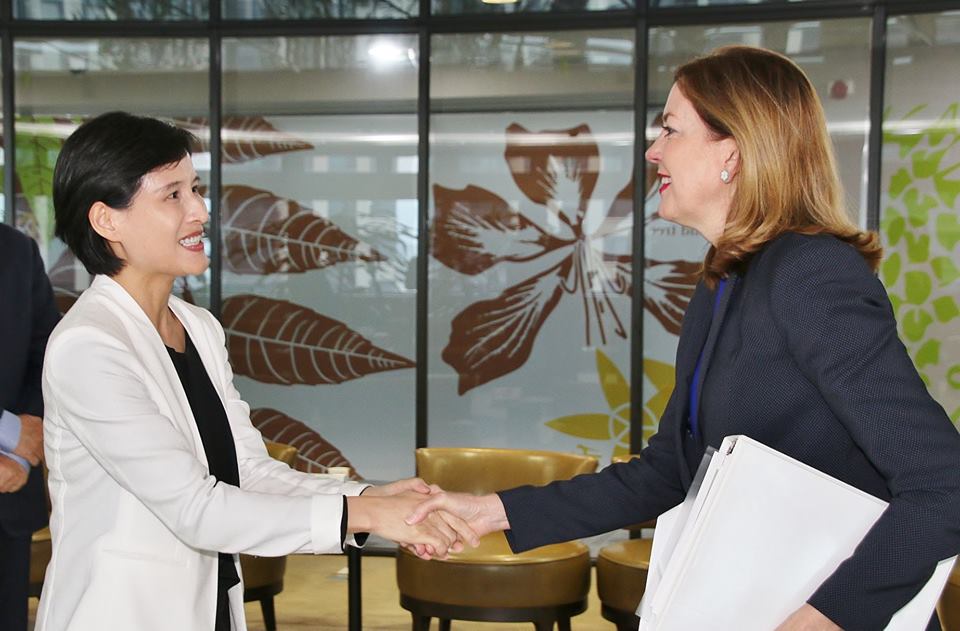 US Assistant Secretary of State Marie Royce met with Minister of Culture Cheng Li-chiun to discuss advancing US-Taiwan cultural exchanges during Assistant Secretary Royce's visit to Taipei for the opening of the American Institute in Taiwan's new office complex.

The June 13 meeting highlighted opportunities for further exchanges through the US Fulbright Program, the Iowa International Writing Program, music diplomacy, audiovisual collaboration in film and music, and the preservation of US historic sites in Taiwan.

Minister Cheng noted that Taiwan and the United States are partners in the pursuit and advancement of democracy, human rights, and freedom of expression, and that these shared values have given rise to robust, bilateral engagement in culture, technology, and the arts.

As a society rooted in diversity and inclusivity, Taiwan remains one of the most democratic nations in Asia and is therefore uniquely suited for nurturing creative talent, said the Minister.

Royce said she was familiar with Taiwan's cultural outposts in Los Angeles, Houston, New York, and Washington, DC, and thanked the Ministry of Culture for investing resources to expand cultural engagement with the United States.

She added that further exchanges in areas such as food culture will help the American people become more familiar with Taiwan.

Recent progress in US-Taiwan cultural ties include the launch of "Taiwan-US Fulbright Exchange Program for Professionals in Arts Administration" this March, and a survey of over 200 heritage sites associated with historic US military and humanitarian aid in Taiwan.

The Minister added that many of these sites have since been included in regional heritage revival projects.

Taiwan has also been making headway at US trade fairs, having made its debut at Book Expo America & BookCon last year and making its first appearance at the New York Rights Fair this May.

US entertainment titans such as Fox and Netflix have also put forth concrete plans for collaboration with Taiwanese audiovisual operators.

Minister Cheng also spoke of Taiwan's plans to establish a national agency to drive the development of original content, and how this Cultural Content Institute would help facilitate further exchanges among the creative sectors of Taiwan and the United States.

The June 13 meeting was hosted by the Minister and her deputies, Dr. Pierre Tzu-pao Yang and Celest Hsiao-ching Ting, at the Ministry of Culture in New Taipei. The US Assistant Secretary of State was accompanied by Special Advisor Caroline Casagrande and Jesse Curtis, AIT's public diplomacy section chief.

Minister Cheng thanked AIT and the US Department of State for their support, and presented a copy of "Contemporary Taiwanese Women Writers: An Anthology," a collection of short stories by some of Taiwan's most representative female writers, to Royce.

The US delegation in return bestowed a commemorative medallion.