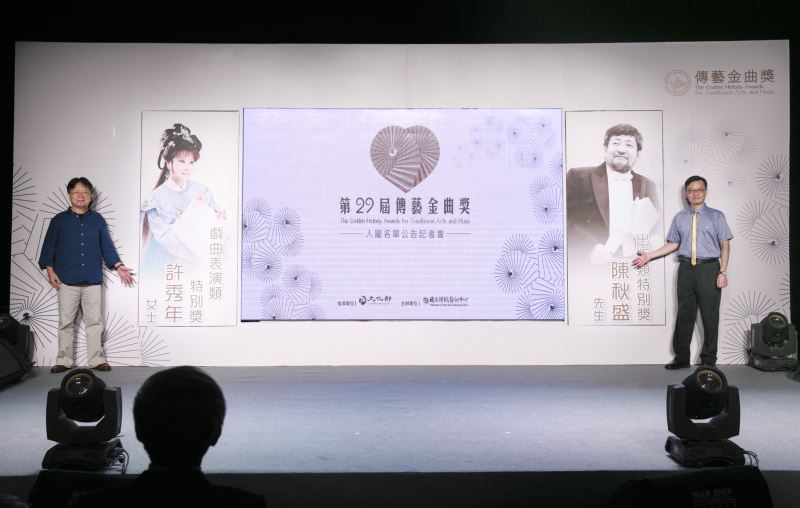 This year's highly anticipated special winners of the Golden Melody Awards for Traditional Arts and Music were announced on July 4, with conductor Felix Chen taking the award in the publishing category and Taiwanese opera performer Hsu Hsiu-nien being named winner in the performance category.

The late Chen was an active part of the local and international music scene. As conductor and musical director of the Taipei Symphony Orchestra, he explored new repertoires and led the Taiwan premieres of a number of major operas and orchestral works.

Under his leadership, the TSO successfully broke onto the international stage, becoming one of the most keenly watched capital orchestras in Asia. Along the way, the orchestra nurtured countless performing arts professionals, expanded the musical horizons of the citizens of Taipei, and helped the performing arts set down deep roots in the city.

Taiwanese opera, or koa-á-hì, performer Hsu has been a constant presence in the art since making her debut at just three years old. Now 62 years of age, her layered characterizations and finely honed vocal skills help her voice different parts vibrantly, while her entrancing physicality and expressiveness made naturalness a hallmark of contemporary koa-á-hì.

Hsu is one of the few stars of her peer group to still be active on stage. She keeps up with modern developments in the art and reliably creates new works and characters befitting her status as a national treasure.

The 29th Golden Melody Awards for Traditional Arts and Music saw some 894 pieces submitted from 102 organizations. The judges spent four months carefully deliberating and discussing the entries before announcing a shortlist of 69 pieces. Winners of the 16 possible awards will be announced at an Aug. 11 ceremony at the newly opened Taiwan Traditional Theatre Center in Taipei's Shilin District.

According to the National Center for Traditional Arts, of the 102 organizations that entered nominations, 69 were in the publishing field and 33 were in performances; and of the 894 submissions, 824 were for publishing awards and 70 for theater accolades. Of those 894 pieces, only 8% were shortlisted, an indication of the high standard and iconic nature of those that made it through.

The theme of this year's awards is "Tradition and Fashion," and was chosen as such to strength the modern side of traditional arts and music, introduce new artistic trends, and pursue the long-term development of traditional performing arts. This echoes the purpose for which the awards were first established — the protection and maintenance of Taiwanese tradition.