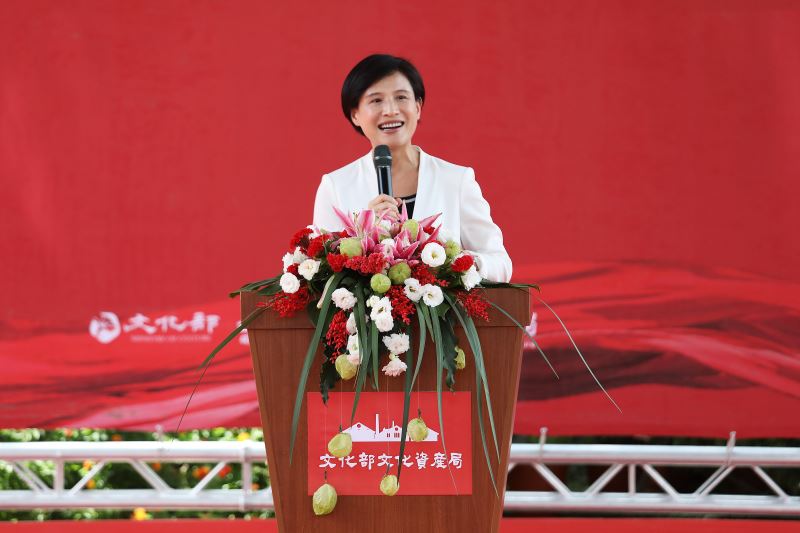 Passing intangible cultural heritage down through the generations is key to maintaining a nation's vitality. In addition, with public anticipation high for the transformation of cultural and creative parks, the Ministry of Culture has successfully pushed for the Taichung Cultural and Creative Industries Park to become a "cultural heritage park." This evolution will add further value to the park through an abundance of preservation and revitalization resources.

Minister of Culture Cheng Li-chun noted that Taiwan has a wealth of both tangible and intangible heritage that will benefit from the transformation of the Taichung Cultural and Creative Industries Park into a heritage-committed park. By providing galleries for the exhibition of tangible cultural heritage and education in restoration methods, as well as holding educational and performance events for intangible cultural heritage, the park will be an invaluable contributor to their ongoing revitalization.

In addition, it will also provide spaces for the exhibition and implementation of more avant-garde applications of technology to the field of cultural heritage, along with experiential activities around national treasures and underwater archaeology, while still preserving the 1916 Cultural Creative Workshop, she added.

Commissioned by the Bureau of Cultural Heritage, these master artists have put in place an apprenticeship system to pass on their arts by training new artistic talent. This program facilitates the revitalization of these arts through continued performance and creative work, helping the Ministry of Culture cultivate some 50 traditional performance artists and craftspeople since 2013.

The park's renaming ceremony also celebrated the graduation of seven apprentices across three artistic fields, namely Paiwan mouth flutes and nose flutes; koa-á-hì, or Taiwanese opera; and pò͘-tē-hì, or traditional puppet theater. The Minister thanked the mentors for their selfless teaching and the students for their commitment. In the future, these graduates will go on to put their newly learned skills to use as they continue to reinterpret and recreate their arts with vibrancy and vitality.

In the past, the preservation and passing on of intangible cultural heritage accounted for a relatively small portion of the national cultural budget, but from 2019, its budget is set to triple. For example, students of the apprenticeship program will enjoy four to six years of grants as a material measure to help their growth. The Minister also called on the public to join in and help keep these arts alive.

In addition to subsidies granted by the Bureau of Cultural Heritage, the National Center for Traditional Arts also runs a "Successor Project" and a "Blossoming Branches Project," both offering artist residencies at the center. At the same time, the budget for the revival of folk theaters is also set to grow, helping provide more places for these arts to be passed on.

With such a wealth of culture and creativity coupled with a boost to the park's accessibility and professionalism, along with a bigger budget that will facilitate better quality service, this park is dedicated as ever to serving the public. The Ministry of Culture is also working with the Taichung City Government to link old districts for the preservation and passing on of cultural heritage, with a particular focus on revitalization. Only by keeping alight the flame of culture can Taiwan's heritage be preserved at its best.