New Zealand Maori search for their roots in Taiwan 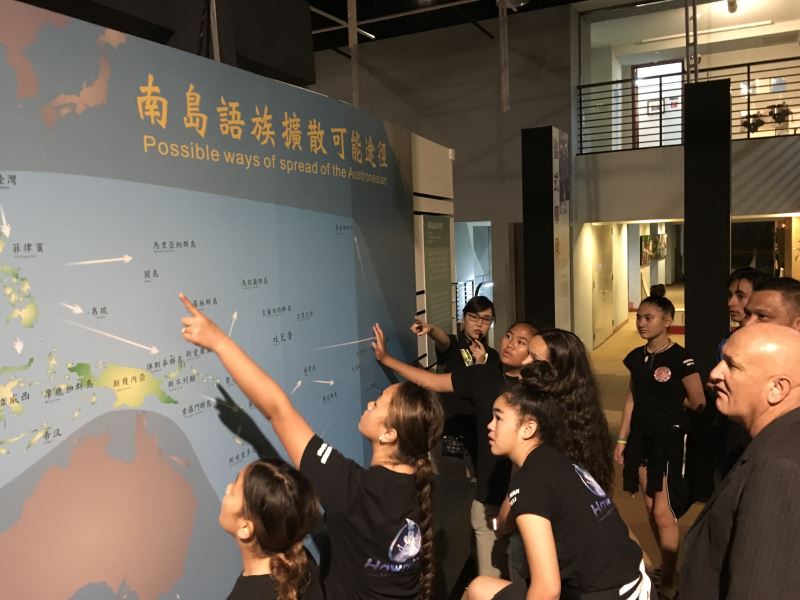 On Aug. 29, a group of elders and young people from the Maori tribe of Ngāti Manu visited the National Museum of Prehistory in Taitung, giving a performance of traditional song and dance in honor of their hosts, as Taiwan has long been considered the ancestral homeland of the Polynesian peoples, including the Maori of New Zealand.

While visiting, they showed a particular interest in the facial tattooing done by some tribes and in the tatala canoes of the Tao. They also enthusiastically discussed which tribe they thought was most like their own and expressed their joy at being able to visit Taiwan.

Tribal leader Arapeta Hamilton said that he was honored to be able to set foot on the land of his ancestors. While each of the Taiwanese indigenous tribes they had visited had its own unique culture, way of life, and crafts, he commented that they were all quite similar to those of the Maori.

The two sides come from similar cultures, with the ancestors of the Maori making their way across the seas thousands of years ago to New Zealand, he continued. Hamilton said he was happy to have had this opportunity to visit Taiwan and seek out the footprints of his ancestors, thanking everyone involved.

With guidance from museum staff, the visitors learned about Taiwan's 16 official tribes, and discussed the cultural similarities and differences between them and the Maori. Standing in front of a large display of the probable migration pathways by which the Austronesian peoples spread, the group focused their talk on the origins of their ancestors. When they came to the exhibit on Atayal facial tattooing, they talked about the different tools and colors used, as well as the different locations of tattoos across genders.

Hamilton explained that in Maori culture, women traditionally tattooed their chins, with only men allowed to have tattoos elsewhere on their faces, and that much like the Taiwanese peoples who do facial tattooing, there are a variety of patterns that all have their own particular meanings.

At the Puyuma exhibition hall, the visitors discussed whether the tribe should hunt and kill living monkeys for their coming-of-age rite, Mangayangayaw. They also spent quite some time at the exhibit on Tao tatala canoes, learning all they could about the Tao's maritime culture. And in the Paiwan-Rukai section, the young visitors excitedly noted how the people in the photographs looked like them, and how this one person looked like so-and-so's daughter.

Of those young visitors, several remarked that they saw the greatest resemblance in the Amis, particularly their weaving and architecture. Others felt the Paiwan were a closer match, especially in terms of skin color and facial features. They pointed to the similarities between items on display at the museum and Maori weapons like the patu, tools like the toki (adze), and the hei matau (fish-hook-shaped carvings which represent strength) on their necklaces, all of which made them even more curious.

They said as a group that this journey to find their roots had been a meaningful experience for them and that they hoped to have the chance to come back to Taitung in the future to learn more about the cultures from which their ancestors may have hailed.

The New Zealand-based Hawaiki Project is a social initiative founded through the collaboration of indigenous tribes along the Polynesian migration pathway from Taiwan to Aotearoa. Their 2018 Taiwanese visit is being documented here: https://www.facebook.com/HawaikiNuiLtd/.