‘Nobody is an outsider’ when it comes to heritage preservation 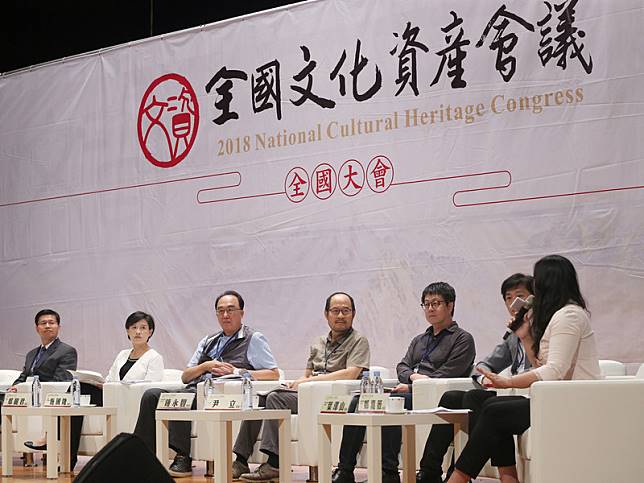 The first national conference of the 2018 National Cultural Heritage Congress was held on Sept. 1 in Taipei. "We must move toward a 2.0 model of cultural preservation," said Minister of Culture Cheng Li-chun. "Only then will we be able to systematically resolve the issue of long-term abandonment of cultural heritage and establish a public governance system that is conducive to cultural preservation from the central government out to local governments."

Between May and August this year, the Ministry of Culture held 12 National Cultural Heritage Congress Regional Forums around Taiwan. Top issues nominated by each regional forum were then discussed at the Sept. 1 national conference, which invited heads of local government cultural agencies from Penghu County and Tainan, Kaohsiung, and Taipei cities, along with representatives from Taipower, Ministry of National Defense, and National Property Administration.

Minister Cheng remarked that if central government agencies and local governments lack ideas around cultural governance, if urban development fails to consider co-existence with cultural heritage, or if communities don’t have a cultural consciousness, then the Cultural Heritage Preservation Act alone will not be enough to rely on, as the law provides but a baseline.

"We must move toward a 2.0 model of cultural heritage preservation," she stressed, "as only then will cultural preservation and both local and national development be able to exist and prosper side-by-side."

She expressed her hope that ministries and local governments would adopt a cultural governance mindset by moving to a more modern approach to preservation work, in which no one is considered as an outsider rather than being fixated on which agency is responsible for what task.

Minister Cheng also addressed concerns about the Taiwan Railway Administration's recently restored steam trains being fined under new emissions restrictions. After discussions with Minister for Environment Lee Ying-yuan, it was agreed that the Environmental Protection Agency would issue an executive order giving steam trains with cultural heritage value an exception from the emissions standards.

Additionally, the Ministry of Culture will amend the Cultural Heritage Preservation Act to include "dynamic preservation" and establish in law appropriate exceptions from environmental regulations for designated or registered cultural heritage.

Consulting the opinions shared at the regional forums and national conference, the Ministry will look at amendments to the Cultural Heritage Preservation Act and related legislation. The focus of such amendments will be on reforming the cultural heritage review system, increasing the proportion of scholars and civil group representatives on the review panels from the current two-thirds to three-quarters, and expanding the number of review panels for each category from a minimum of two to a minimum of five.

Amendments to the Cultural Heritage Preservation Act will also involve looking into legislation relating to a cultural heritage “capacity bank,” along with setting penalties for the mismanagement of historical buildings and memorials. In addition, to provide incentives to repair privately owned cultural heritage, these efforts will also look strengthen the capacity transfer system for urban areas and will not rule out direct purchases by the government in non-urban areas.