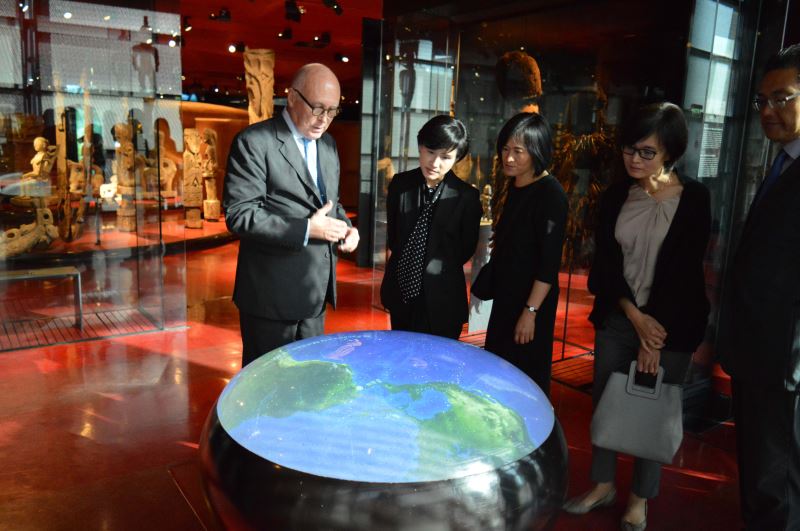 Minister of Culture Cheng Li-chiun presided over an accord-signing ceremony in France on Sept. 12 that will see Taiwan's indigenous heritage on display at the newest major museum in Paris.

The agreement between the Ministry of Culture's Taiwan Cultural Center in Paris and the Quai Branly Museum (Musée du quai Branly - Jacques-Chirac) will play to the Parisian museum's strengths as a collector of indigenous artifacts from Africa, Asia, Oceania, and the Americas by focusing on Taiwan's Austronesian roots and contemporary aboriginal identity.

The planned program of events will begin with a film series on Sept. 20, in which Taiwanese filmmakers of indigenous heritage will hold post-screening forums and workshops to discuss historic injustices and methods for implementing transitional justice. The film selection is curated by none other than pioneering ethnographer and documentary maker Hu Tai-li (胡台麗).

The Quai Branly Museum will also organize several showcases next year to highlight different aspects of Taiwan's diverse heritage. The accord outlines plans for an exhibition on Taoist paper crafts, which are traditionally used as ceremonial offerings; and a scheduled performance by FOCA (Formosa Circus Art), a contemporary circus troupe featured by Off Festival d'Avignon last year.

Minister Cheng, who was given a tour by Quai Branly President Stéphane Martin, praised the museum's curatorial focus on presenting historic artifacts through contemporary narratives, and said she saw an opportunity for a joint Taiwan-France exhibition organized by several museums from both nations.

The Minister then led a delegation including Lai Hsiang-lin (賴香伶), executive director of the Taiwan Contemporary Culture Lab (C-Lab), to visit IRCAM (Institute for Research and Coordination in Acoustics/Music), one of the world's largest public research centers dedicated to both musical expression and scientific research, and 104 CentQuatre-Paris, a collaborative artistic platform and unique territory for experimentation.