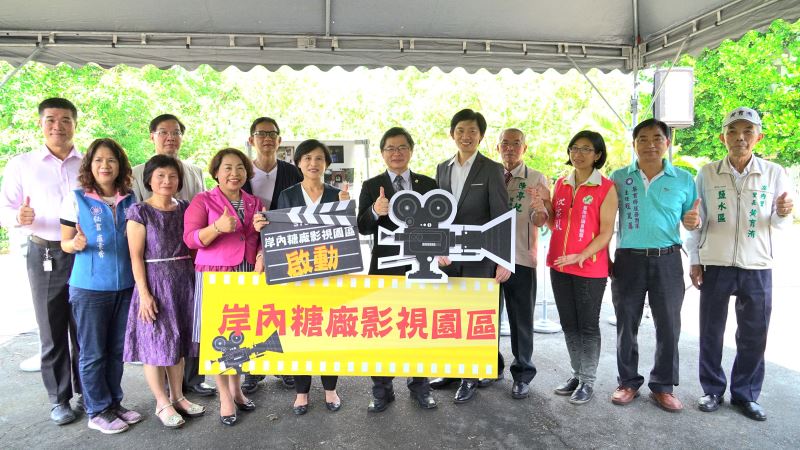 Annei Sugar Factory (岸內糖廠), an abandoned refinery situated in the southern city of Tainan, has been granted a budget of NT$1.2 billion by the Ministry of Culture in its transformative bid to become a film production base.

Built in 1903, the sugar factory was the first of its kind and was established and managed by Taiwanese entrepreneur Wang Hsueh-nong (王雪農) during the Japanese colonial era. Following several transitions in postwar Taiwan, the factory ceased operations and relocated its business to Vietnam in 1997.

Culture Minister Cheng Li-chiun visited the sugar factory on Sept. 17, noting that it was a shame that many film sets such as the 1930s old street built for baseball epic "KANO," the Wushe village in historic saga "Warriors of the Rainbow: Seediq Bale (賽德克巴萊)," and the air base of Nanjing in TV drama "A Touch of Green (一把青)" were demolished after shooting. Thus, the studio complex plans to establish several backlot sets for future film and television production.

The transformation project of sugar factory, which was proposed by the Tainan City Government, will also partner with private film production teams that will provide acting talent, technical support, and other related services in the hope of keeping such talented professionals employed in Taiwan.

Minister Cheng thanked the Tainan City Government and Taiwan Sugar Corporation for joining the government's efforts in developing the nation's audiovisual sector. The establishment of the Cultural Content Institute (文化內容策進院) will bring more financing and investment to film studios and boost the number of Taiwan-made productions, she added.

Li Meng-yen (李孟諺), interim mayor of Tainan City, noted that the Annei Sugar Factory has great advantage in terms of its geographical location and surrounding cultural heritage, making it extremely suitable for use as a film production base. In addition to the studio's plans for creating themed sets of different historic eras, from Ming and Qing dynasties to the Japanese colonial era and postwar Taiwan, the city government will also offer subsidy programs for set construction, Li said.

Led by director Tsao Jui-yuan (曹瑞原), the production crew of the Public Television Service's upcoming drama "Lady the Butterfly (傀儡花)" will be the first team to be stationed at the sugar factory studio. With shooting scheduled to start next year, the crew will begin constructing their film sets next month.

Developing original audiovisual content and strengthening related industrial ecosystems are among the Ministry of Culture's top priorities. The establishment of the studio complex will strengthen the foundation of Taiwan's audiovisual production, and serve as a crucial part of the nation's cultural infrastructure. In the future, more measures and projects related to content production will be added to advance Taiwan's audiovisual development.