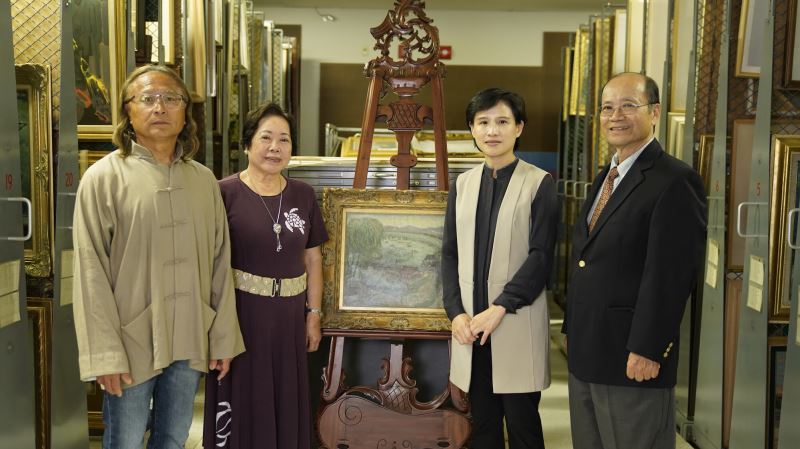 After more than a year of discussions between the California-based Sun Ten Museum and the Ministry of Culture, it was recently agreed that the museum would donate its entire collection, free of charge, to Taiwan.

Located in Irvine, Sun Ten Museum was founded in 1993 by Hsu Ring-lin (許林碖), wife of Sun Ten Pharmaceuticals founder Dr. Hsu Hong-yen (許鴻源). The museum's collection consists of Dr. Hsu's private collection of some 600 important Taiwanese pieces ranging from the Japanese colonial era to the modern day. Dr. Hsu immigrated to the US in 1975, and after his passing in 1991, his eldest son Charles Hsu (許照信) worked to realize his father's wishes: "These paintings are not my own, they are the property of the Taiwanese people. One day, I want the entire collection to be returned home, to be returned to Taiwan."

Minister of Culture Cheng Li-chun remarked that since taking office, she has actively promoted efforts to reconstruct Taiwanese art history, and to learn that the family of Dr. Hsu, a pioneer of scientific Chinese medicine, were willing to donate their century-spanning art collection to Taiwan was both touching and a great driver of this policy.

Minister Cheng made a special trip to Irvine during the Mid-Autumn Festival holidays to express her sincere gratitude to both Director Chen Fei-long (陳飛龍) and Sun Ten Museum Chairman Charles Hsu in person. On Sept. 22, the two sides officially signed a letter of intent for Sun Ten to donate the collection in its entirety to the Ministry of Culture, with the National Taiwan Museum of Fine Arts responsible for the subsequent transportation, safekeeping, restoration, research, and curatorial work.

The collection covers an impressive array of artists. Preeminent artists of the Japanese colonial era such as Tan Ting-pho, Liao Chi-chun, Li Mei-shu, Kuo Hsueh-hu, Li Shih-chiao, and Yen Shui-long are among those with works in the collection, along with significant contributors to the development of post-war Taiwanese art like Lu Zhi-zheng, Chang Yi-hsiung, Hung Jui-ling, Liao Shiou-ping, Hsiao Ju-sung, and Chen Cheng-hsiung.

Also featured in the collection are the works of artists who grew up and honed their craft in Taiwan after the Chinese Civil War, such as Chen Ting-shih, Chin Sung, Shiy De-jinn, and Shen Yaochu. Sun Ten's collection even extends to the younger generation of artists who spent time studying in the US during the 1970s and 1980s, like Ava Hsueh, Mei Dean-e, Hsu Tzu-kuey, Jun T. Lai, and Huang Ming-che, all of whom remain active and important contributors to Taiwan's art world today.

Charles Hsu's wife and younger sister were also both in attendance at the Sept. 22 signing ceremony. The family noted that the late Dr. Hsu always had a deep connection to Taiwan, and through his long years of collecting the works of iconic artists, hoped to do his part to preserve this precious part of Taiwanese history. He also repeatedly emphasized to his family that the collection was not the personal property of the Hsu clan, but rather that it should one day be returned for the enjoyment of all the Taiwanese people.

Director Chen also commented that he looks forward to seeing the Ministry of Culture work with the resources of professional art museums and harness private-sector research and curatorial energy to integrate the collection into the broader context of Taiwanese art, and help its true historical importance shine more brightly.