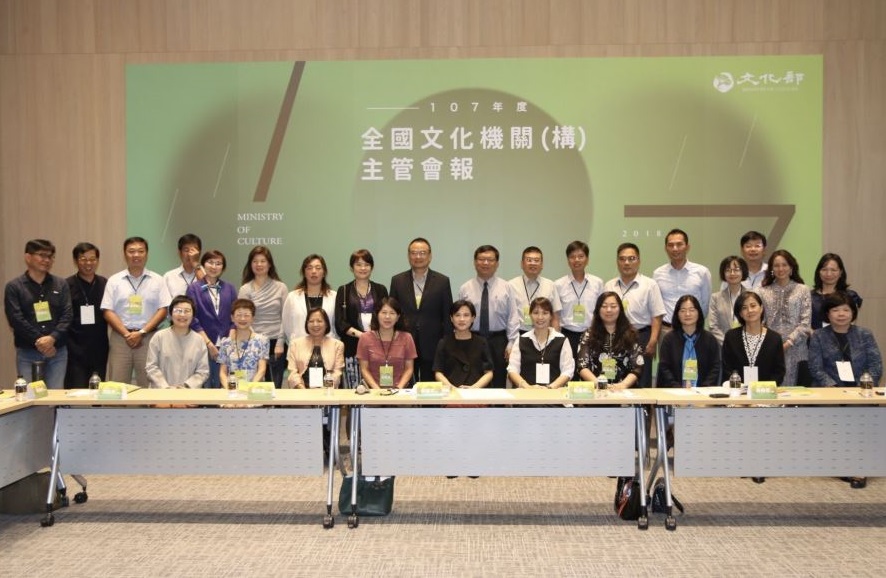 The Ministry of Culture convened the 2018 National Conference on Cultural Governance at National Kaohsiung Center for the Arts (Weiwuying) on Sept. 26, with the heads of local government cultural agencies in attendance to discuss the future of the nation's cultural policies.

The first report of the conference concerned "The National Cultural Memories Database and its Digital Value-Added Applications." This project aims to develop "the DNA of Taiwan culture" through digital technologies and platforms for cooperation. Using these, the cultural elements of Taiwan will be optimized and opened up for use, while at the same time efforts will be stepped up to promote public and community participation in the collection, transcription, and extension of that DNA of local knowledge.

Minister of Culture Cheng Li-chun stated that "in the past, we focused on speed and technology while neglecting to think about content. In the future, we will work to strengthen Taiwan's digital collection mechanisms for homegrown content."

"The central government will lead the way in setting up the necessary systems, while local governments will coordinate with the private sector to provide content and cooperate on establishing local foundations of knowledge that are open to use by artists and creators," Cheng added.

The second report was entitled "Driving the Arts — Expediting an Ecosystem for Development of the Arts." The Ministry of Culture has spearheaded a project to upgrade professional arts spaces, and for the first time a special budget from the Forward-looking Infrastructure Development Program has been formulated around the concept of "hardware driven by software."

This concept is built around the ideas of creating cultural hotspots based on regional heritage and promoting equal cultural rights, with a focus on "software" such as cultural professionals and civic organizations leading the way, introducing professional governance, and encouraging the development of a robust artistic and cultural ecosystem.

Then through the linkage of "hardware" such as the triad of national art venues across northern, central, and southern Taiwan, along with the renovation of art and cultural spaces across the country over the next three years, the Ministry hopes to serve as an engine that will drive local arts into a new era.

The third report focused on "The Project to Preserve and Revive Privately Owned Old Buildings (and Potential Cultural Assets)." The purpose of this project is to harness the power of individual- and community-driven initiatives to preserve old, privately held buildings that have the potential to be classed as cultural heritage but do not yet have that legal classification.

The hope is for the Taiwanese people to take a new perspective on opportunities for the preservation of future cultural heritage, by encouraging members of society to not only place greater emphasis on older buildings, but also to promote the revival of such buildings.

Minister Cheng noted that fresh ideas are what are truly important, and that Taiwan’s "1.0 model" of cultural preservation needs to be upgraded to "2.0." As of April 2018, statistics show that of the 2,414 pieces of recognized cultural heritage, 43% are in private assets, 27% under central government administration, and 30% managed by local governments.

At present, the budgets for the various agencies are being compiled, and local governments have been asked to provide an inventory of recognized cultural assets. Through accelerated planning and discussions, the Ministry of Culture will continue to support local governments in their efforts to restore cultural heritage.

The Ministry of Culture will also propose amendments to the Cultural Heritage Preservation Act and related legislation. The focus of such amendments will be on reforming the cultural heritage review system, and increasing the proportion of scholars and civic group representatives on the review panels from the current two-thirds to three-quarters. The Ministry will also look into legislation relating to a cultural heritage "capacity bank," along with setting out penalties for the mismanagement of historical buildings and memorials.

To provide incentives for repairing privately owned cultural assets, these efforts will also look to strengthen the capacity-transfer system for urban areas and will not rule out direct purchases by the government in non-urban areas or future expansions of tax incentives.

In addition, the Ministry has asked for the assistance of local governments in several matters, including the setting of penalties for significant cases of failed heritage conservation, to enforce the Cultural Heritage Preservation Act.

With the approval of the Executive Yuan and the legal basis of Article 100 of the Cultural Heritage Preservation Act, The Ministry is also investigating means of having the central government take over the restoration of cultural heritage where local governments are unable to do so. To avoid such efforts leading to a cycle of inaction on the part of the relevant authorities, future reports on such proxy work will also involve follow-up on where the responsibility for local government inaction lies.

In 2019, the Ministry of Culture’s budget will for the first time account for over 1% of the central government's total annual expenditure, while the budget for supporting the cultural agencies of local governments is set to grow by 300%.