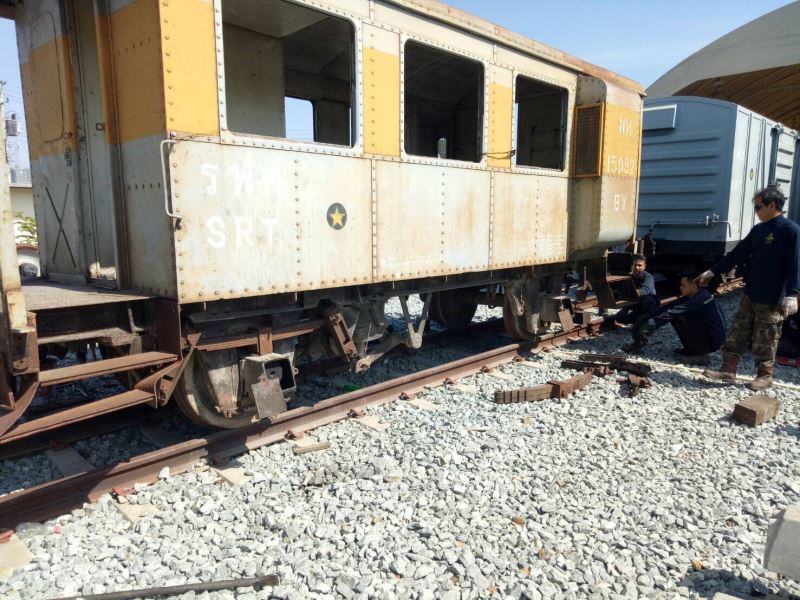 A Thai brake van numbered BV-15092 successfully arrived in port at Keelung in the early morning of Oct. 3 after being shipped from Thailand by container ship. After it passes customs, it will then make its way to the Taipei Railway Workshop. This brake van, originally produced in Taiwan, is a reflection of Taiwan's railway industry development and the economic exchanges of the times. It is also a shining example of the technology employed by the Taipei Railway Workshop in the production of train cars of its era. Now, after many years hard at work in a foreign land, it has finally come home.

The brake van is one of 100 sold to Thailand in 1964, a high-water mark for Taiwan's foreign sales of train cars. This marked the first sale of train cars to Thailand by the Taiwan Railways Administration and was organized with the help of the ROC's embassy in Thailand at the time. Half a century later, with the assistance of the Taipei Economic and Cultural Office in Thailand and the State Railway of Thailand, one of those cars was finally located, and is set to return to the Taipei Railway Workshop after clearing customs.

In August 1963, Thailand held an international bid for 100 brake vans. The Taipei Railway Workshop was up against 22 manufacturers from nine countries, including Belgium, France, West Germany, the United Kingdom, Japan, India, and Australia. In the end, Taiwan was awarded the contract for cars numbering 15001 through 15100 at a total value of over US$500,000 ― a new high point for foreign sales of railcars by Taiwan.

On May 29, 1964, with the help of the ROC's embassy to Thailand, then-director of the Taipei Railway Workshop Liu Jin-yi (劉近義) and the head of the working group went to Bangkok to sign the contract with the State Railway of Thailand, completing the Taiwan Railways Administration's first sale to the country.

Once the contract was signed, the Workshop began actively planning production, and within two months, the main schematics were sent to the State Railway of Thailand for review. That review done, seven and a half months later the cars began to be shipped over in batches, and the project became an example of how the industry had progressed to the point the TRA was not only able to produce cars for local use, but also capable of tailoring production for conditions elsewhere.

After the 100 cars were shipped, the Taiwanese side retained none of that model for itself, and over five decades later, with technology having passed them by, the brake vans were gradually retired.

For Taiwanese railfans and those interested in Taiwan's rail history, these cars have remained a point of pride to this day. In December 2017, the Taipei Economic and Cultural Office in Thailand and the State Railway of Thailand began working together to locate one of the cars. Once found, BV-15092 was stored for safekeeping near Bang Sue Railway Station in Bangkok, and after more than nine months of negotiations, purchase planning, and hammering out other details, a process of replacing parts, applying protective packaging, and moving the car by crane began in late September this year.

Soon it was aboard a Taiwanese ship by the name of Kuo Chia (meaning "The Nation") and on its way back to Taiwan for its glorious homecoming.

About the Thai Brake Vans

The brake vans were sold to Thailand in 1964 by Taiwan for use with freight trains and generally put to use at each end of those trains. They included equipment such as hand brakes and guard valves and served as a place for conductors to sit during trips. These particular vans were notable for having not only front and rear lookouts, but also lookout windows which stuck out from either side, giving the conductor the ability to check on the status of the train.