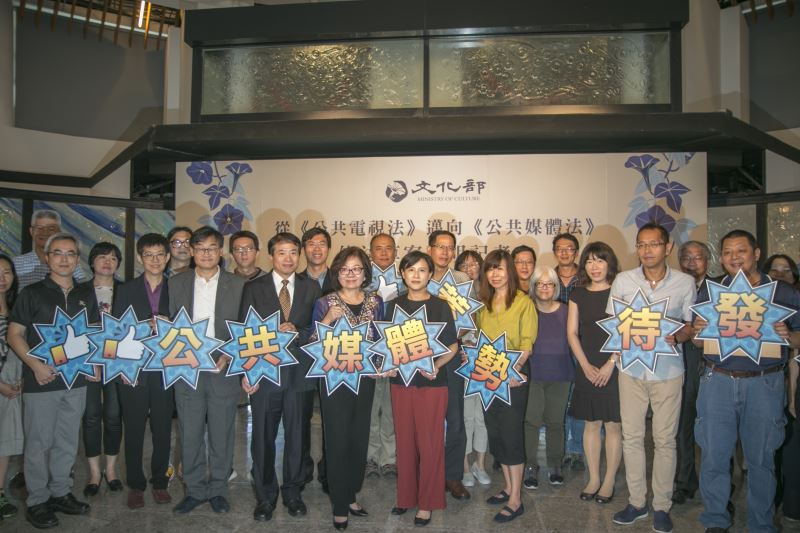 With an eye on the future of the nation's public media, the Ministry of Culture has undertaken a comprehensive review of the Public Television Act, drawing up a new blueprint for the proposed Public Media Act that was announced at a press conference on Sept. 20. At the conference, the Ministry explained the direction of future amendments and announced that after public hearings and inter-ministerial consultations to collect opinions from a wide swathe of the community, a draft act would be submitted to the Executive Yuan for review this October.

The amendments are focused on creating a more complete public media service along three axes: the public, the industry, and internationalization. On the public side, the draft Public Media Act will protect the language rights of speakers of a variety of native languages through a public media group; this same group will also work to protect the right of access to the media among children and underprivileged groups, and secure both equal cultural rights and the cultural diversity of Taiwan.

On the industry side, public media has long played an essential role in promoting the development of Taiwanese talent and will continue to be a major player in supporting the growth of Taiwan's homegrown content. As such, through joint production, commissioned work, and cooperative efforts spanning across national borders, Taiwan's future public media will help elevate the country’s content production and broadcasting environment through the sharing of industry-related resources.

On the international front, meanwhile, with the creation of a global channel, the world will have the chance to see news from a Taiwanese perspective, while the channel will also provide a means for promoting Taiwan's cultural content abroad, and reinforce the country's communication rights.

Key points of the proposed Public Media Act, which will replace the existing Public Television Act, include:

1) Composition of the board of directors: The board of directors will be reduced in size from between 17-21 people to 11-15, with a staff representative included among their membership. Their tenure will be increased from three years to four, with a staggered election system seeing half the board up for renewal every two years. This will help the composition reflect changing public opinion while also providing a means for incumbent board members to pass on their experience and keep things going stably and more efficiently.

2) Election of directors and supervisors: To ensure balance between powers and responsibilities, the current practice of having the Review Committee composed of "just persons" selected by the Legislative Yuan will be abolished in favor of nominations by the premier for the direct consent of the Legislative Yuan, a similar method to that used for the National Communications Commission.

3) Sources of funding: To address the issue of insufficient long-term funding of the Public Media Foundation, the Ministry of Culture will look into the feasibility of establishing a "national cultural development fund" through the draft Cultural Basic Law. This proposed source of funding aims to provide for the long-term development of the Foundation by strengthening its operations, stability, and financial independence.

5) Establishment of a robust system of accountability: To implement a system of public accountability and increase public participation, additional provisions for public supervision will be created in addition to the existing supervision of the Legislative and Executive Yuans. Through a mechanism for the joint participation of ― and supervision by ― the public as a whole, the development of public media will be more in line with the people's expectations.

6) Adding dedicated channels for more communities: To promote diverse cultural development and provide broadcasting services that are accessible to a range of linguistic and cultural communities, additional channels will be created for various groups in society. Such channels will be planned and established by the Public Media Foundation. To effectively incorporate them into the public media ecosystem, dedicated funding will be provided for each, ensuring that such channels will be able to operate independently and not compromise their focus.

7) Integrating existing public media to protect employee rights and interests: Within two years of enacting the Public Media Act, Radio Taiwan International, the Central News Agency, and the Public Media Foundation will be brought under the same umbrella, while a buyback of privately held shares in the Chinese Television Service (CTS) will be actively pursued to boost the overall efficiency with which public media resources can be used. Union representatives will be invited to participate in the drafting of guidelines for this integration effort, ensuring the rights and interests of employees are protected.

The Ministry welcomes the input of all members of the public to ensure the thoroughness of the proposed Public Media Act. Public hearings will also be held across the nation, and all those concerned with the future development of Taiwan’s public media are welcome to take part in the conversation.