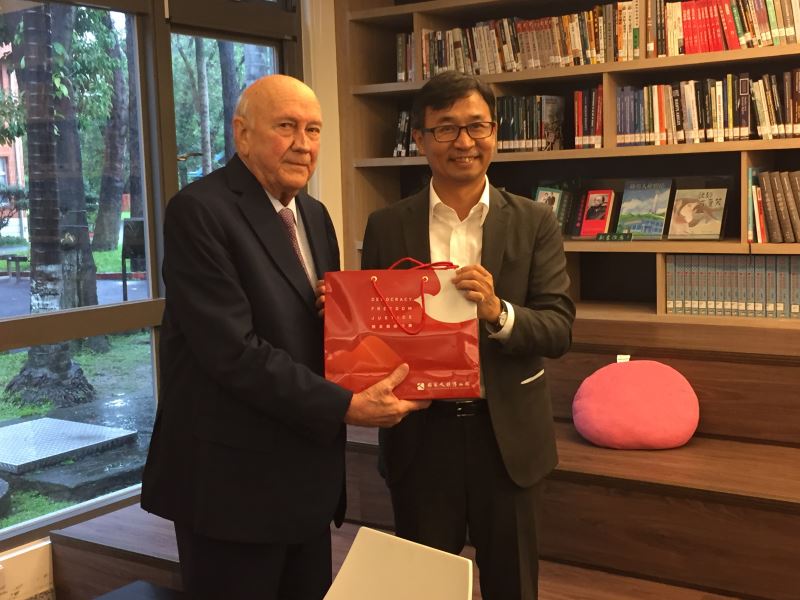 On Oct. 11, Nobel laureate and former State President of South Africa F.W. de Klerk made a personal visit to the National Human Rights Museum's Jing-Mei White Terror Memorial Park. President de Klerk remarked that in the face of historical mistakes, only through sincere moves toward reconciliation can a nation truly move forward. He also noted that he understands how many countries face conflicting voices in the pursuit of transitional justice, and encouraged Taiwan's political victims to share their stories so that future generations will understand what happened in the past.

Having met with President Tsai Ing-wen on Oct. 9, former President de Klerk accompanied a group including Vernon R. S. Steward, former South African ambassador to the United Nations and the head of the F.W. de Klerk Foundation, on an Oct. 11 visit to the National Human Rights Museum. He was led on a tour of the Museum by Director Chen Jung-hong (陳俊宏) and former political prisoner Chen Chin-sheng (陳欽生), visiting the site of a former military court and a former detention center known as the Ren-ai Building, and learning about the abuses of human rights that took place during the White Terror era.

Chen Chin-sheng was detained at the Jingmei Detention Center in 1971 after having been framed for involvement in the bombing of a United States Information Agency office in Tainan. During the tour, he described the miscarriage of justice he suffered at the hands of the military court and showed former President de Klerk to his cell, No. 33, recalling his painful year and a half of solitary confinement.

After hearing about Chen's confinement to that small cell, stripped of his right to even exercising in the courtyard, de Klerk exclaimed that it was truly unfathomable. He also said that he felt a sense of deja vu visiting the Jingmei Detention Center, and that while prisons in each place are similar, the victims' stories he heard at Jingmei differed greatly from those of South Africa's victims. As such, he encouraged more Taiwanese victims to share their stories, so that the truth may be told and more people can understand the realities of history, further promoting national reconciliation.

When South Africa began its ethnic reconciliation efforts, former President de Klerk said, there were initially fierce confrontations between the black and white communities. It took a long time for the friction to ease and the two sides to work together to find common goals, agree on mutually acceptable methods, and ultimately build bilateral trust and promote true reconciliation.

He also expressed his support for the National Human Rights Museum's efforts to bring the truth to light and promote human rights education, as well as encouraging more witnesses to history like Chen Chin-sheng to stand up and have their stories set down so that people both in Taiwan and abroad could better understand what happened in Taiwan during those years and provide more evidence for the promotion of transitional justice.

National Human Rights Museum Director Chen Jung-hong noted that during the tour of the Museum, President de Klerk and his group shared their experiences in promoting ethnic reconciliation and transitional justice, as well as stating their hopes that the Museum will continue in its efforts to promote historical truth and reinforce human rights education.

In this, Director Chen said, the former president showed the wisdom and stature of a true warrior for international human rights. Chen Chin-sheng's story particularly moved the visitors. In addition to getting a sense of the hardships faced by those who fought for democracy and freedom in Taiwan, the South African delegation also encouraged victims to continue defending the truth and working to make the public more aware of the true meaning of transitional justice.