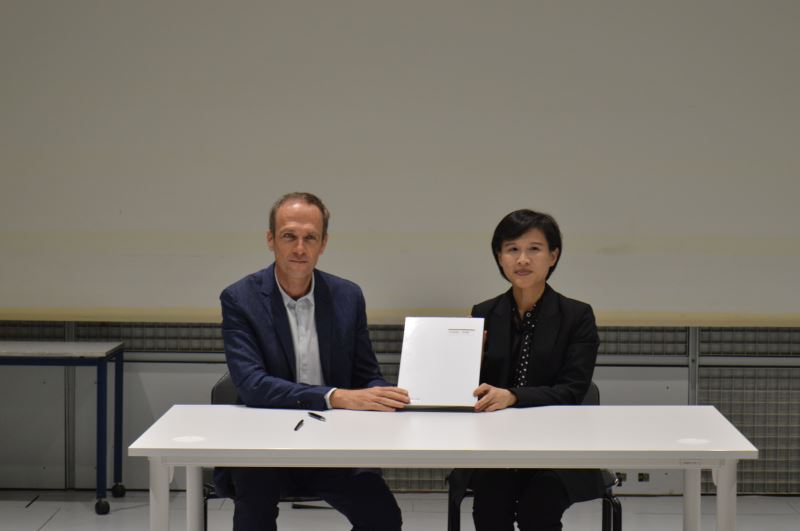 During her visit to France this September, Minister of Culture Cheng Li-chiun signed a memorandum of understanding with Frank Madlener, director of the renowned IRCAM (L'Ircam, Institut de Recherche et Coordination Acoustique/Musique) music research institute in Paris. The MOU will facilitate the exchange of talent and joint music production between Taiwan and France, and sets the stage for the opening of an experimental sound lab at Taipei's newly launched Taiwan Contemporary Culture Lab (C-LAB).

Founded in 1969 by post-war classical composer Pierre Boulez, IRCAM is affiliated with the Pompidou Centre under the tutelage of the French Ministry of Culture. It is now one of the world's largest public research centers dedicated to both multidisciplinary expression and scientific research in music and sound.

Transformed from the former Air Force Command Headquarters in Taipei, C-LAB was launched this August with a focus on five areas ― contemporary art, sound and images, digital humanities, social innovation, and a "remembrance project" preserving the collective memories of Taiwan ― to bring in talent and resources to spur new ideas.

In this new partnership, IRCAM has promised to share with Taiwan its professional audio equipment and expertise in multidisciplinary and experimental applications of sound and music. C-LAB is also preparing to launch an experimental sound lab in late 2020 to pursue technical, academic, and cross-sector research with IRCAM.

The MOU was signed by Minister Cheng during her September visit to IRCAM headquarters in Paris, and cooperative details were discussed and finalized on Oct. 26. The Ministry of Culture looks forward to receiving IRCAM's assistance in setting up a framework for international participation and collaboration, and applying IRCAM's expertise towards nurturing the creativity of Taiwan's performing arts, multimedia productions, and experimental sound and music.