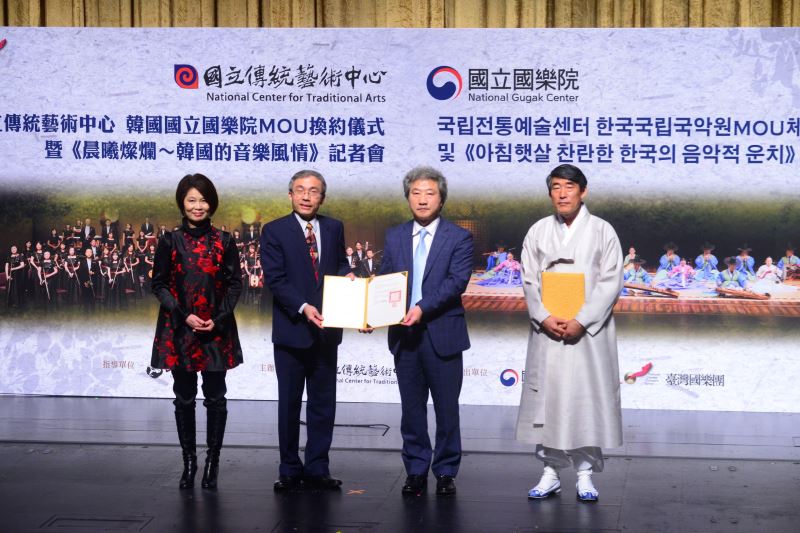 The National Center for Traditional Arts (NCFTA) and the National Gugak Center (NGC) of South Korea held a ceremony on Nov. 2 to mark the signing of a memorandum of understanding that inaugurates a three-year program of traditional arts exchange between the two nations.

The NGC is an organization under the Republic of Korea's Ministry of Culture, Sports, and Tourism dedicated to the promotion of traditional Korean music and dance (known as gugak). The center has deep historical roots in the country, with its earliest predecessor established under the Kingdom of Silla in the 7th century, evolving through the Kingdoms of Goryeo (established in the 10th century) and Joseon (15th century) before ultimately taking its modern form. Today, the NGC encompasses a museum in Seoul, the Umyeon-dang and Yeak-dang theaters, and an Outdoor Experience Plaza.

"The signing of this bilateral, three-year MOU," said National Center for Traditional Arts Director Chen Chi-min (陳濟民), "will not only boost the quality of traditional performing arts exchange between Taiwan and South Korea, but also introduce the people of both sides to essential tourist destinations and provide a higher quality of tourist experience through sophisticated traditional arts and invaluable cultural heritage."

On Nov. 2 and 3, the two parties joined forces to hold a concert entitled "Dazzling Dawn: Musical Portraits of Korean Peninsula II." This first step in the cooperation between the two national traditional arts centers also served as the closing performance for the 2018 Asia-Pacific Traditional Art Festival in Taiwan.