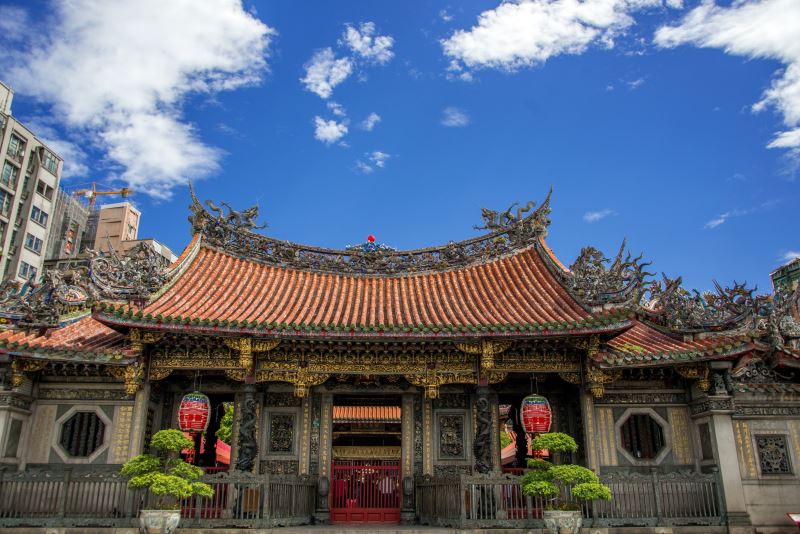 Two centuries-old buildings in Taipei City — Longshan Temple in Wanhua District and Dalongdong Bao'an Temple in Datong District — have been named national historic sites, bringing the total number of such sites in Taiwan to 100.

Established in 1738, or the third year of Emperor Qianlong's reign, Longshan Temple served as the center of faith for a community of immigrants from Fujian Province's Quanzhou region. Having witnessed the early pioneers who cultivated the greater Taipei area, the Sino-French War, and the Japanese colonization of Taiwan, the 280-year-old temple has frequently been altered or repaired over the decades, giving rise to unique features such as Qing-style architecture, Japanese-forged bronze dragon pillars, and Western-inspired ornamental columns.

Immeasurable historic and artistic values aside, Longshan Temple is a shining example of Taiwan's localized Buddhist culture and endeavors to promote the bodhisattva Guanyin by upholding traditions, contributing to charity, and serving as a window to Taiwan for foreign visitors.

Established in 1804, or the fourth year of Emperor Jiaqing's reign, Dalongdong Bao'an Temple underwent repairs during the Japanese colonial era with a competitive "arena-style" program that pitted builders against each other, giving rise to the wide array of styles and techniques that make up the building today. The competition is thought to have arisen from the need to hire two or more groups of craftsmen to complete the construction in time.

Bao'an Temple serves Emperor Baosheng, a folk deity of medicine. Therefore, the 214-year-old temple has faithfully preserved this sect of belief along with its dedication in supporting medicinal rites and celebrating the deity's birthday with street parades, traditional performances, and spectacular offerings. Worshippers here seek divine "pharmaceutical lots" to cure their ailments.

Now respectively known as the 99th and 100th national historic site of Taiwan, Longshan Temple and Bao'an Temple will meet with the Bureau of Cultural Heritage to discuss future repairs, of which up to 95% of restoration expenses can be subsidized by the government. The Bureau will also offer assistance in disaster response, scientific preservation methods, and other areas of need.

The Ministry of Culture's Historic Sites, Buildings, and Memorials Review Committee will convene again on Nov. 30 to evaluate three more Class II Historic Sites that are under consideration for promotion to national status. These three sites are the Qing Dynasty Taiwan Provincial Administration Hall in Taipei, and Qihou Battery and the former British Consular Residence of Takao in Kaohsiung.