Plans for bringing forth another ‘Taiwan Renaissance’ underway 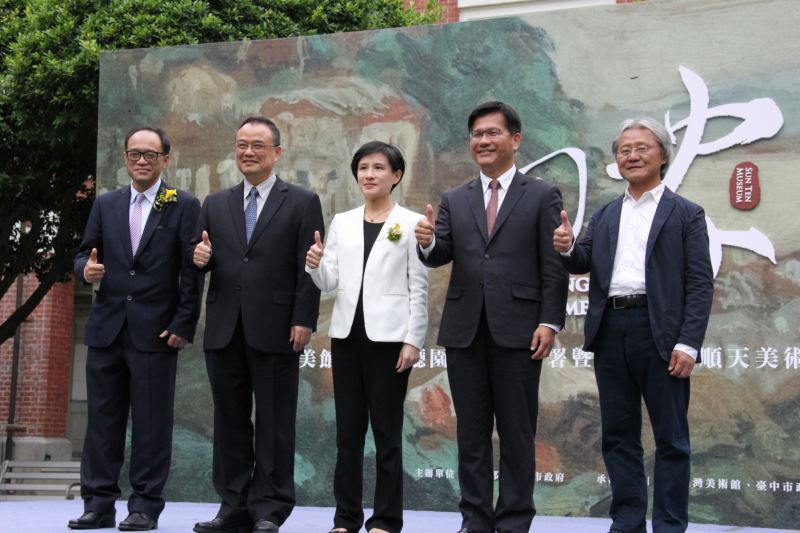 Minister of Culture Cheng Li-chun and Taichung Mayor Lin Chia-lung (林佳龍) signed a letter of intent for cooperation on Nov. 1, announcing the Ministry's plans to work with Taichung City Government on a project for the revitalization and reuse of the Taichung Prefectural Hall and the former city council building to bring forth another "Taiwan Renaissance."

Minister Cheng noted that the Ministry approved a budget of NT$1.05 billion for reconstructing the historical city center of Taichung last year. Included in this budget is a NT$580 million grant from the central government's Forward-looking Infrastructure Development Program, which will be further bolstered by NT$470 million from the Taichung City Government. This will go towards creating a "Taichung Prefectural Hall Park" by combining the Taichung Prefectural Hall and the former city council building, followed by further work on restoring historic sites by the Cultural Heritage Department of Taichung City.

Recently, the Ministry of Culture accepted a collection of some 600 art pieces from the Sun Ten Museum of Irvine, California, which marks an important step in efforts to reconstruct Taiwan's art history. The Ministry will continue to work on expanding its collection of modern and contemporary art, while the Sun Ten donation will be put on display at the restored Taichung Prefectural Hall, with many thanks to the gracious benefactors for their selfless contribution.

The Taichung Prefectural Hall is an important heritage building in Taiwan, one which a national-level organization should call home the way the National Museum of Taiwan Literature is housed in the former Tainan Prefectural Hall. To this end, once the planned park has been restored, the Ministry of Culture will designated it as an affiliated venue of the National Taiwan Museum of Fine Arts.

The park will focus on Taiwanese art history, with the restored Prefectural Hall dedicated to modern Taiwanese art exhibitions, while the former city council building will house two upcoming projects — a national photography organization and a national arts archive — that will be established with NT$1.2 billion in funds from the Ministry.

At the Nov. 1 press conference, Chen Fei-long (陳飛龍), director of the Sun Ten Museum, made a special symbolic presentation of gifting artist Liao Chi-chun's (廖繼春) "Overlooking Tamsui" oil painting to Minister Cheng. Accepting the gracious donation that represents the start of the handover of Sun Ten Museum's collection, Minister Cheng echoed the museum's appreciation for the pieces finally "coming home," remarking that she was moved by Dr. Hsu Hong-yen's (許鴻源) lifelong wish for his collection to return to Taiwan.

In addition to presenting Director Chen with a certificate of appreciation, the Ministry of Culture has also put the National Taiwan Museum of Fine Arts in charge of handling the donation, including the logistics of transporting the art pieces back to Taiwan. With the expertise and resources of the Taichung-based museum on hand, this invaluable private collection will undergo the highest level of research, restoration, and promotion that the state can provide, in a manner that befits such a historical and meaningful donation.

Central Taiwan is where the first Taiwanese art movement began, and the Ministry of Culture plans to work with the Taichung City Government to jointly promote a cultural renaissance in the Old City area of Taichung by spearheading the Taichung Prefectural Hall Park project.