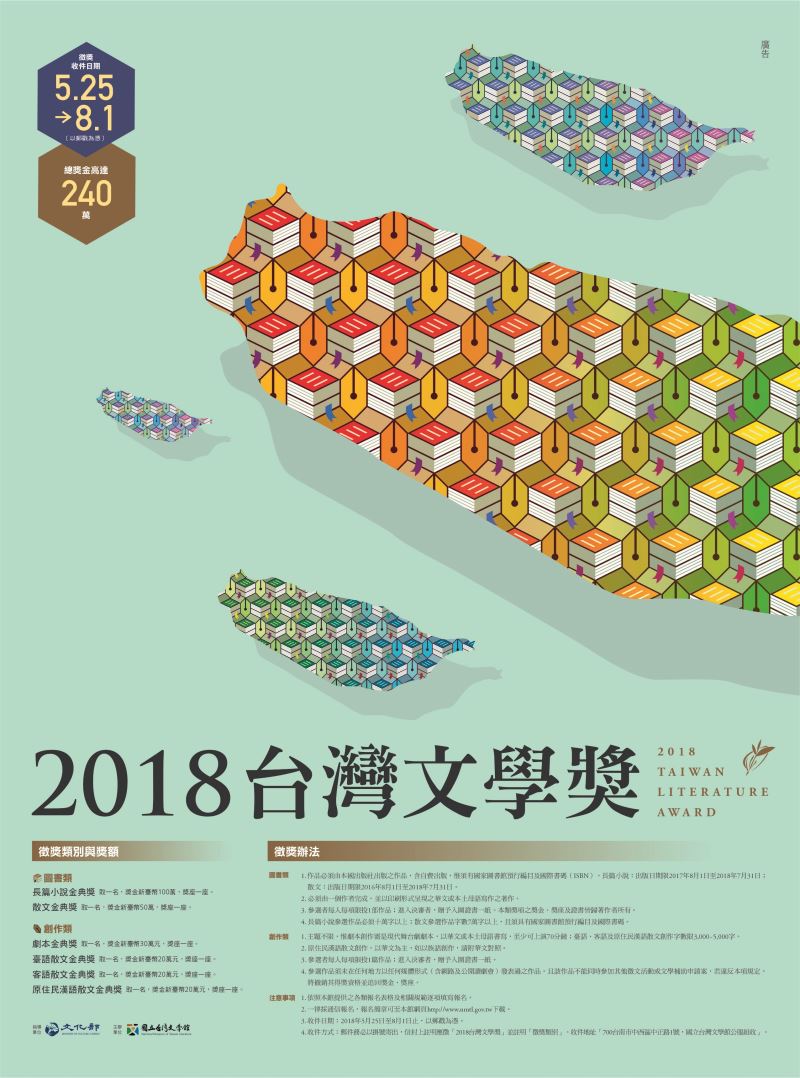 The National Museum of Taiwan Literature held the ceremony for the 2018 Taiwan Literature Awards on Dec. 8 in Tainan. Lin Chun-ying's (林俊頴) "Formosa Heat (猛暑)" took the Best Novel award, with Hsieh Wang-lin's (謝旺霖) "Walking the River (走河)" capturing the Best Prose award. To help generate some heat and anticipation, the awards were split into a two-stage process for the first time, with nominees announced publicly and the winners revealed only at the ceremony.

For winning Best Novel with "Formosa Heat," Lin received a prize of NT$1 million. The judges described "Formosa Heat" as a work of "heterotopia" —neither dystopia nor utopia, but instead a work that combines elements of another dimension with allegories to the contemporary world — that opens up a whole new realm of possibilities for contemporary fiction.

The Best Prose award went to Hsieh's "Walking the River," with the author receiving prize money of NT$500,000. The judges noted that the format and sheer time invested in "Walking the River" make it noteworthy. Hsieh has spent the last decade working on it, and every detail contained therein speaks to a personal realization. It is a work of rare quality and impressive prose and has made Hsieh an author to keep an eye on.

Best Script was awarded to Feng Yi-kang (馮翊綱) for "A Big Lie (謊然大誤)," netting the writer a NT$300,000 prize. A work characterized by "words within words," the judges found the three stories of love and separation told in "A Big Lie," some of which had a touch of the magical, to all be entertaining reads with flowing prose.

Lu Mei-chin’s (呂美親) "Tī Phóo-iu-má Lia̍t-tshia Lāi-bīn," meaning "Inside the Puyuma Express (佇普悠瑪列車內面)," was honored with Best Taiwanese Prose and a prize of NT$200,000. The judges remarked on the poetic flavor of the components of this anthology thanks to its usage of train travel as a metaphor for passage through time and space. The content touches on topics of youth, linguistic experience, and awakening of national identity, and combines aspects of both poetry and prose to create a touchingly sentimental book.

Hsieh Chin-hsiu (謝錦綉) took the Best Hakka Prose award for "Kodama (Kodama庄最尾正徙走个人家)," along with the NT$200,000 in prize money, with the judges remarking on the fine writing and detailed narrative therein.

Best Aboriginal Prose in Mandarin was awarded to "Yu A-hsiang (游阿香)" by Yu Yi-te (游以德), together with a prize of NT$200,000. The judges were struck by the vivid, powerful way in which Yu brought to life a process of self-discovery as represented by her trip to the household registration office to make arrangements for her deceased grandmother, whose Atayal name was required to be transcribed into Mandarin Chinese.