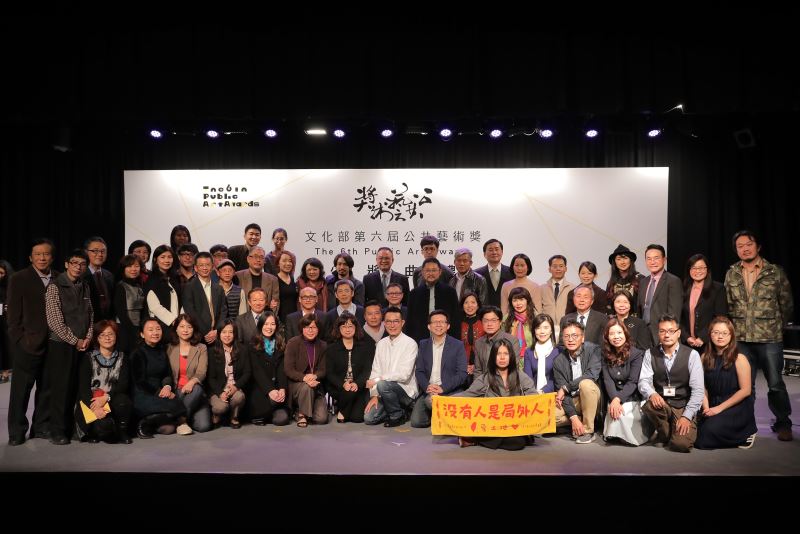 From the first round of judging, the panel selected 30 nominees from 243 hopefuls. The next round saw the judges travel across Taiwan, visiting the pieces in situ in Taichung, Tainan, Kaohsiung, Hualien, Keelung, Taipei, and New Taipei. They listened to briefings from organizers, curators, agencies, and artists; inspected the pieces and their surroundings; strove to understand the media and methods used by the artists; looked at the pieces in historical and geographical context; and ultimately, through a long discussion process, selected the winners.

The judges unanimously praised the nominees for their impressive diversity and creative energy, as well as for how they integrated art with the environment and brought out key characteristics of their settings. The judges were also impressed by the deeper interactivity and presentation of the works up for the Public Participation and Education Outreach Awards, which they felt highlighted how Taiwan's public art policies have encouraged further diversity in participation and planning.

The Excellence Award this time was given to a series of five pieces created by six artists in conjunction with the Keelung-based National Museum of Marine Science and Technology — Liu Ho-jang (劉和讓), Agi Chen (陳怡潔), Joyce Ho (何采柔), Chang Li-shan (張力山), Chen Ching-yuan (陳敬元), and Lien Chien-hsing (連建興). Incorporating the local culture of the Badouzi region and the museum's own architecture, the works were well-received on social media for showcasing the proactive and in-depth role of contemporary Taiwanese art and highlighting the characteristics of the environment and the individual creativity of the six featured artists.

The Judges' Choice Award went to "Reappear Tower," a project built around the restoration of the Old Tainan District Court, a national historic site. Artists Lai Ting-wen (賴亭玟) and Ma Chunfu (馬君輔) took a humorous approach to resurrecting the unrepairable courthouse tower, using a mirroring effect to create ingenious interaction and a sense of traveling between the past and the present. The avant-garde and uniquely meaningful nature of the piece is what captured the attention of the judges.

The Public Art Awards are held every two years by the Ministry of Culture and are part of the government's efforts to encourage investment in public art by the public sector, private sector, and artists alike. A list of all the winners of the 6th Public Art Awards can be found here (Chinese only).