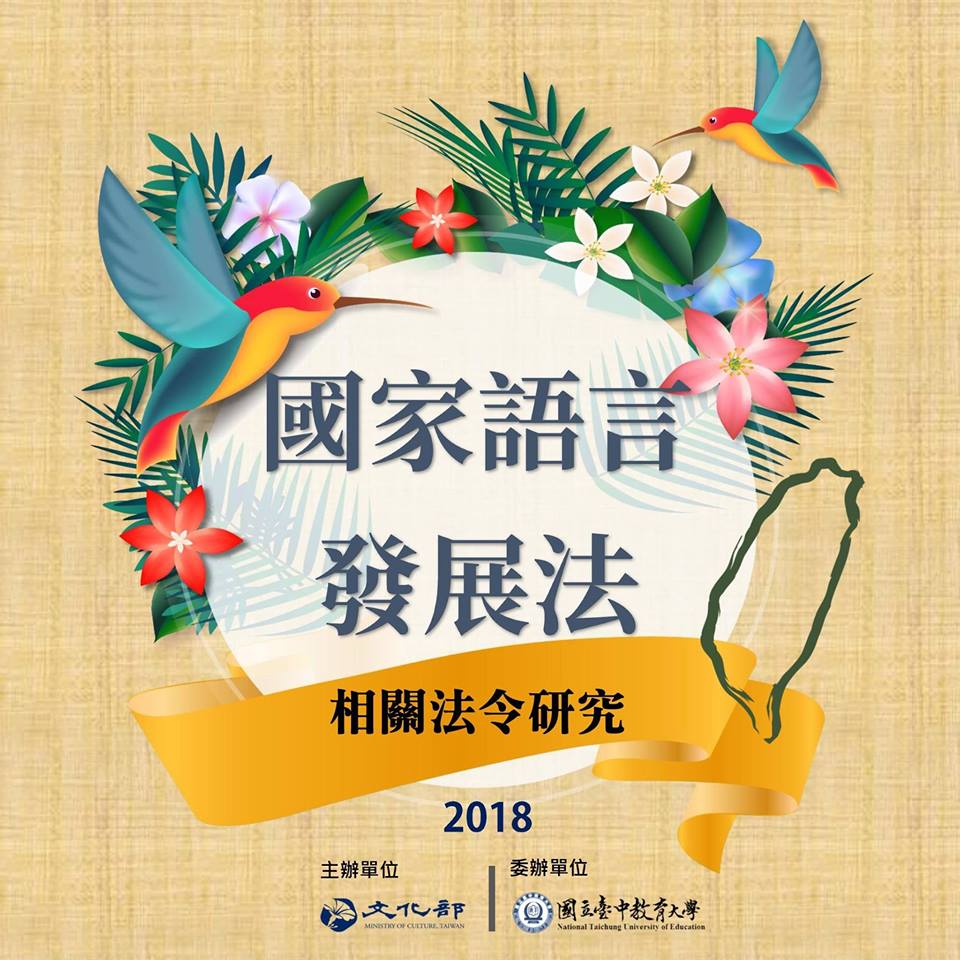 The National Languages Development Act (國家語言發展法) passed its third reading in the Legislative Yuan on Dec. 25. The Act lays out clear guarantees for the inheritance, revitalization, and development of the native languages of Taiwan's people (including Taiwan Sign Language), out of respect for the nation's linguistic diversity.

Minister of Culture Cheng Li-chiun remarked that this is a historic moment for Taiwan. The goal of this Act, from the Ministry's initial drafts in 2016 through to this passage, has been to ensure the ongoing development of Taiwan's diverse languages and cultures; to protect the rights of all ethnic groups to education, communication, and public services in their mother tongues; and to ensure that all citizens can use their native languages with pride. The government intends to fully support the inheritance, revitalization, and development of all of Taiwan's languages into the future.

Respectively amended in June 2017 and January 2018, the Indigenous Languages Development Act and Hakka Basic Act have already clearly established the Hakka language and the many indigenous languages as "national languages (國家語言)." However, these laws do not offer a legal foundation for revitalization and preservation efforts.

To protect the linguistic diversity of Taiwanese society, the Ministry of Culture drafted the National Languages Development Act, providing a comprehensive basic law governing national linguistic policy. At the same time, this Act aims to provide protection to Taiwan Sign Language and other native languages of the Taiwanese people, facilitating equality in revitalization and development.

The spirit of this new Act is built around the preservation, revitalization, and equal development of the languages of Taiwan, particularly those used by ethnic minorities that are under threat. It does not aim to establish them as official languages for government use; rather through facilitating plans for the preservation of linguistic diversity and sustainable cultural development, it aims to ensure that these languages, including Taiwan Sign Language, enjoy the protections necessary for them to develop and be passed down to future generations.

The major points of the Act include:

The National Languages Development Act does not specify the languages covered by name out of respect for the rights of the groups that use each language to employ the names they are most familiar with. In the future, when the Enforcement Rules for the Act are drafted, the names of the various languages will be specified after long-term research and investigation, as well as broad consultation with all relevant parties and the establishment of public consensus. The guiding principle of this is "coexistence in diversity (多元共存)."

Beyond this, the goal of establishing the National Languages Development Act is to enable all Taiwanese to use their respective native languages with confidence and dignity through the protection of their rights to education, communication, and usage. As such, the Act guarantees students the right to choose and study their mother tongue(s), but does not compel schools to teach all languages, nor does it require students to learn all languages.

With regard to education at schools, in accordance with Article 18 of the National Languages Development Act, the K-12 Education Administration expects to have a curriculum implemented for the 2022 academic year (which starts from Aug. 1, 2022) with elective lessons in all national languages laid out for all 12 grades, enabling students to choose any national language to learn.

The Act also allows three and a half years for the implementation of relevant educational provisions. During this time, the relevant ministries and local education authorities will engage in in-depth discussions and research aimed at finding ways to set out appropriate lesson structures and course hours that will not add to the pressure students already face. They will also begin planning for funding, teachers, and other teaching resources.

The National Languages Development Act intends to provide courses in more languages at schools for students to choose one from rather than requiring everyone to learn all of them. As for the "school education shall use national languages" clause that the Act mentions, rather than indicating that they must do so, this is primarily aimed at providing a legal foundation for protecting the rights of parents and students to choose from diverse options regarding immersive or diverse linguistic education through resources provided by central or local government authorities.

It does not require all schools to teach in all languages, but rather provides for each school to develop teaching plans in line with their respective educational content with administrative guidance and review conducted by relevant authorities after discussions with curriculum development committees.

In addition, the Act stipulates that the government should develop standardized orthographies for the purpose of properly recording and preserving national languages. The government shall thus work with civic groups to develop each orthographic reference standard, including both Sinitic and romanized orthographies, digital input methods, and other methods of expression.

It does not, however, place restrictions on how people may write, allowing for the coexistence of multiple varying forms of writing. In the future, central government agencies will cooperate closely with the Ministry of Education to ensure the preservation of all national languages.

The National Languages Development Act guarantees the right of the people to freely choose to use their national language. Referring to Article 14 of the UN International Covenant on Civil and Political Rights, the Act also establishes that when people participate in administrative, legislative, or judicial governmental proceedings, they may use the national language of their choosing and the government shall provide interpreting services as needed. At the same time, to effectively bolster the quality and effectiveness of these services, the government will actively train interpreters in the various national languages.

Finally, in view of the fact that the Indigenous Languages Development Act and Hakka Basic Act both provide for the protection of local and regional languages, the National Languages Development Act further reiterates and clarifies certain areas of responsibilities, such as authorizing local authorities to designate national languages as the linguae francae of particular areas based on the concentration of particular ethnic groups.

The Ministry of Culture intends to further provide for the effective promotion, revitalization, and development of all national languages through careful development of regional implementation methods and safeguards by drafting a set of Enforcement Rules for the Act.

Minister Cheng has stated that the work of national language revitalization cannot be delayed. Upon taking office in 2016, she had a National Languages Development Section established under the Ministry's Department of Humanities and Publications. Through the National Languages Development Act, the Minister hopes to spur the development and preservation of languages and cultures throughout society, strengthen the integration of relevant resources across government and civic organizations, and promote progress and diversity in Taiwan's cultural development.

In the course of getting the Act passed, the Ministry has also promoted a variety of other measures for the development of national languages, such as stronger public services and the creation of an environment friendly to the use of such languages. It is hoped that the inheritance and revitalization of these national languages will proceed apace, avoiding the possibility of any of them falling victim to the passage of time.