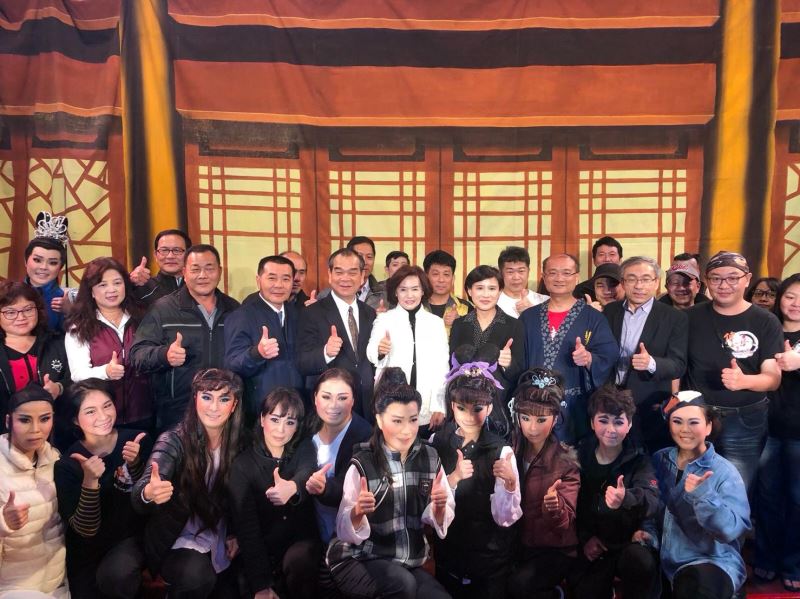 Minister of Culture Cheng Li-chiun visited a creative park, a reputable archaeologist, a Taiwanese opera company, and a puppetry center in Yilan County on Feb. 16, underscoring the richness of the northeastern county's historical heritage.

The Minister arrived at Chung Hsing Cultural and Creative Park (中興文創園區) on the first leg of her Yilan visit to meet with experts and learn more about the ongoing preservation and research efforts on the Blihun Historical Site (漢本Blihun考古遺址), which was recognized by the Ministry of Culture as the country's 8th national archaeological site in 2016.

The Blihun site was discovered in 2012 on a hillslope near the southern exit of Gufeng Tunnel when digging had just begun under the Suhua Highway Improvement Project. An excavation team led by Chu Suei-jin (邱水金), a reputable archaeologist known for his studies on the prehistory of Yilan, has rescued the site and completed the first phrase of the Blihun preservation project.

During her visit, the Minister thanked Chu in particular for the archaeological efforts that he and his team had long put into Yilan. The recognition of the Blihun site as the country's 8th national archaeological site in 2016 and the Wanshan Historical Site (丸山考古遺址) as the 9th in 2018 show how the government holds the richness of Yilan’s cultural heritage in high regard, she added.

As a portion of the aforementioned archaeological findings will be stored in a proposed archival center at Chung Hsing park, the Ministry has also set aside NT$140 million from its "Reconstruction of Historic Scenes" initiative to highlight the park's history as a shuttered state-run pulp-manufacturing factory.

The Minister then visited Lan-Yang Taiwanese Opera Company (蘭陽戲劇團) to cheer on the dancers on the eve of their new performance, pointing out that a public Taiwanese opera group like Lan-Yang could exert its influence to preserve the traditional art form not only through performances, but also through public education, innovative content, and talent cultivation.

Given that Taiwanese opera originated in Yilan, the establishment of Lan-Yang Taiwanese Opera Company by the Yilan County Government was an important move to facilitate the inheritance of cultural traditions and knowledge from generation to generation, she added.

At the start of this year, the Ministry of Culture has allocated NT$15.5 million to the Yilan County Government through the Executive Yuan's Forward-looking Infrastructure Development Program to overhaul Yilan's arts and cultural venues and upgrade their operations.

Of the NT$4.5 million devoted to streamlining and enhancing such operations, NT$2 million is aimed at facilitating closer cooperation between Lan-Yang and cultural organizations and sites based in Yilan, Minister Cheng explained.

The Minister also visited the Lize Puppet Arts Colony (利澤國際偶戲藝術村) and was briefed by Cheng Jia-ying (鄭嘉音), troupe director of Puppet and It's Double Theater (無獨有偶劇團), on the puppetry center's development.

Pointing out how the Asia-Pacific Traditional Arts Festival is held annually in Yilan by Taiwan's National Center for Traditional Arts, she noted the Lize center could help host international puppet shows during the festival and develop into a new bastion of contemporary Asian puppetry.

Minister Cheng also encouraged the Lize Puppet Arts Colony to join the Ministry's "Experience-based Cultural Education (文化體驗教育計畫)" initiative as a hotspot where children can learn to appreciate the beauty of puppetry through tangible, hands-on experience.