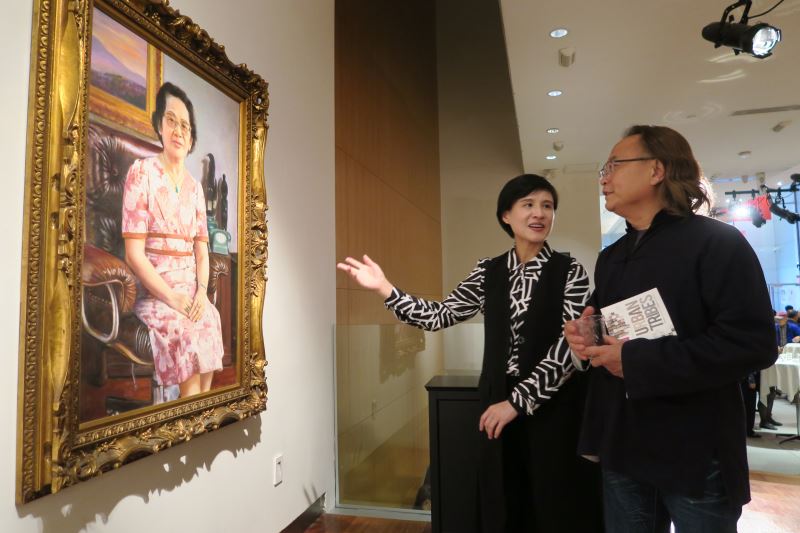 Minister of Culture Cheng Li-chiun attended the opening ceremony of a New York exhibition featuring the donated collection of the late Dr. Hsu Hong-yen (許鴻源) on May 23, noting that Dr. Hsu was not only a collector of Taiwanese art, but an aggregator of Taiwanese art history.

To house over 600 Taiwanese paintings dating from the Japanese colonial era to modern day, the Irvine-based Sun Ten Museum was established in 1993 by his widow Ring Lin Hsu (許林碖) after Dr. Hsu passed away in 1991. Hsu was the founder of Sun Ten Pharmaceutical (順天堂藥廠) and moved to California in 1975 to expand his company, and his overarching hope was for his art collection to return home one day, as he saw these artworks not as private property, but as public assets of Taiwan.

Respectful of Dr. Hsu's wishes, his eldest son Charles Hsu (許照信) agreed to donate the century-spanning Taiwanese art collection to the Ministry of Culture last year. Two US exhibitions will be held to showcase these national treasures before they return home — "A Homecoming Celebration" in New York and "Drama and Exhibit" in California.

Minister Cheng noted that the Ministry of Culture put forth the "Reconstruction of Taiwan's Art History" proposal as part of the central government's Forward-looking Infrastructure Development Program to systematically document the nation’s progression in the arts, preserve such history and culture, and pass down this legacy for future generations to enjoy.

Thanking Hsu, Chen Fei-long (陳飛龍), and other members of Sun Ten Museum for tending to such an invaluable collection, the Minister called upon the public to join the movement in rediscovering how the sentiments of different Taiwanese generations are embedded in these artworks.

The Sun Ten collection covers an impressive array of artists. Preeminent artists of the Japanese colonial era such as Tan Ting-pho, Liao Chi-chun, Li Mei-shu, Kuo Hsueh-hu, Li Shih-chiao, and Yen Shui-long are among those with works in the collection, along with significant contributors to the development of post-war Taiwanese art like Lu Zhi-zheng, Chang Yi-hsiung, Hung Jui-ling, Liao Shiou-ping, Hsiao Ju-sung, and Chen Cheng-hsiung.

Also featured in the collection are the works of artists who grew up and honed their craft in Taiwan after the Chinese Civil War, such as Chen Ting-shih, Chin Sung, Shiy De-jinn, and Shen Yaochu. Sun Ten's collection even extends to the younger generation of artists like Ava Hsueh, Mei Dean-e, Hsu Tzu-kuey, Jun T. Lai, and Huang Ming-che, all of whom remain active and important contributors to Taiwan's art world today.

Upon the collection's return, the Taichung-based National Taiwan Museum of Fine Arts will begin documentation, restoration, and research work in preparation for a 2020 exhibition re-introducing these treasures to the people of Taiwan.