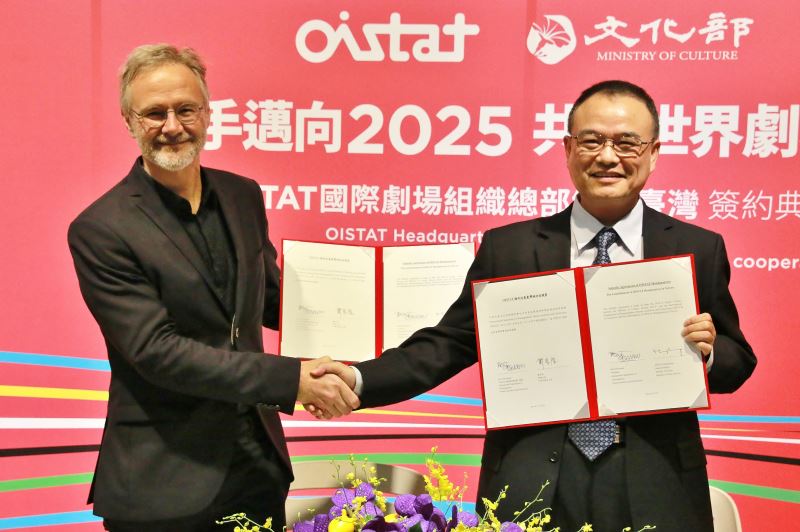 Deputy Minister of Culture Hsiao Tsung-huang (蕭宗煌) and President Bert Determann of the International Organisation of Scenographers, Theatre Architects and Technicians (OISTAT) signed an agreement on May 28 to extend Taiwan's role as the host of OISTAT's international headquarters by another five years.

OISTAT, an international community of theater designers, professionals, and practitioners celebrating the making of live performance worldwide, moved its secretariat to Taiwan from the Netherlands in 2006 at the invitation of the Council for Cultural Affairs, the predecessor of the Ministry of Culture. Five years later, the office was upgraded to become the organization's international headquarters.

The Deputy Minster stressed that Taiwan entered a grand era of theater upon the unveiling of the National Kaohsiung Center for the Arts (衛武營), which is also known as Weiwuying and touted by The Guardian as the biggest arts venue on Earth, in October last year. The Kaohsiung center is one of the three performing arts centers that the Ministry has completed in northern, central, and southern Taiwan in recent years.

The magnificence of these centers, he added, proves Taiwan's capability in managing large-scale performing arts centers and hosting internationally renowned artists and troupes.

He noted that theater technicians have become ever more important than before as regional performing centers are also improving their facilities and personnel training with the support of the central government’s Forward-looking Infrastructure Development Program.

Agreeing with OISTAT's emphasis on scenographers, theater architects, and technicians as the three key elements for theater operations, Deputy Minister Hsiao stated that OISTAT is one of the few international NGOs headquartered in Taiwan and that he looks forward to seeing it grow as a global platform for theater exchanges.

OISTAT President Determann, who flew in from the Netherlands to sign the agreement, thanked the Ministry of Culture for its long-standing support for the organization so that it can operate its headquarters in Taiwan and while remaining connected to theater communities around the world.

After Taiwan joined the OISTAT network, the Ministry worked closely with the OISTAT headquarters for many years to help Taiwan's theater sector keep abreast of global trends and create more opportunities for Taiwan's performing artists, theater architects, and theater technicians.

Among other future collaboration plans, OISTAT, Taiwan Association of Theatre Technology, and Taiwanese designers and performers will take part in the 2019 Prague Quadrennial of Performance Design and Space, which will run from June 6 to 16 in the Czech Republic.

Dignitaries, including prominent Taiwanese cultural professionals, attended the May 28 signing ceremony to support the MOC-OISTAT cooperation and celebrate the arrival of a new prosperous era for Taiwan's theater sector.