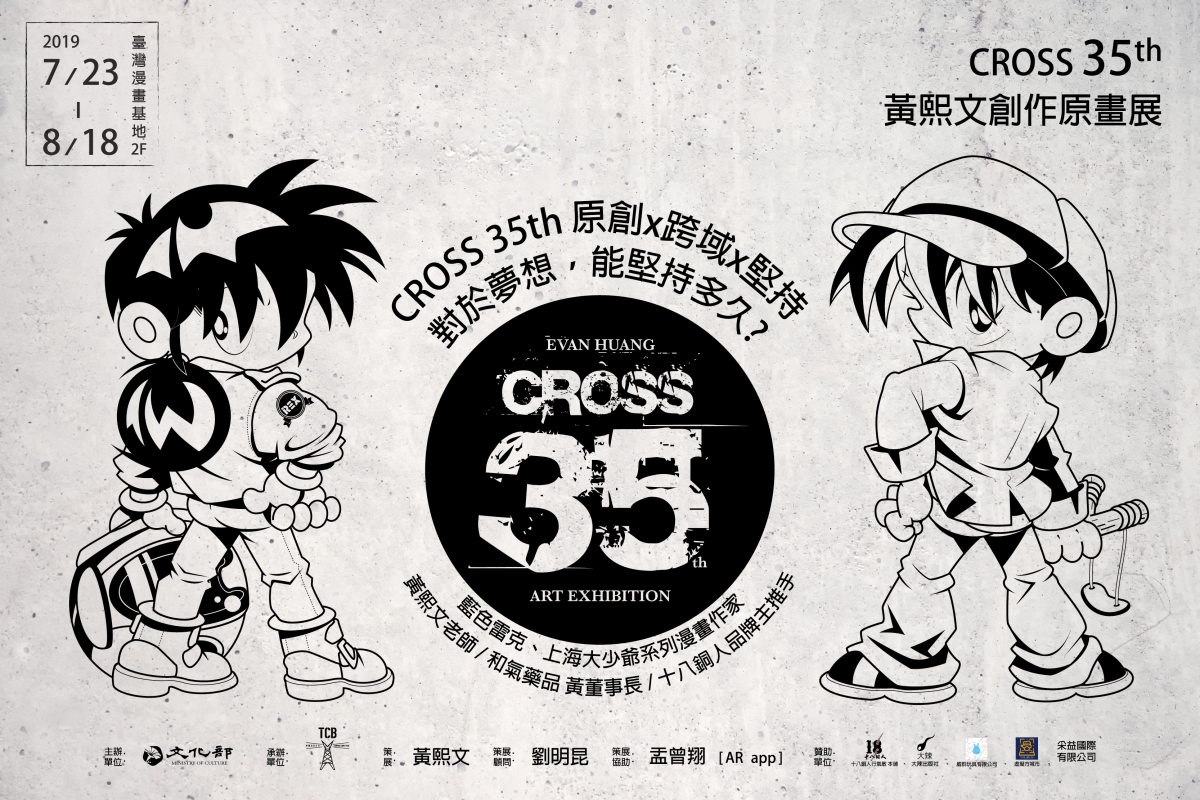 From July 27 to Aug. 18, the Taiwan Comic Base will be playing host to "Evan Huang: Cross 35th Art Exhibition." For the first time, some 80 original drawings of Evan Huang's (黃熙文) breakthrough characters Blue Rex and Shanghai Junior will be on display, along with animations, theme songs, augmented reality (AR) experiences, and holographic projections of scenes from the comics.

Huang has been tireless in the pursuit of his dream over the past 35 years, with his latest work "Shanghai Junior (上海大少爺)" receiving nominations for Best Cross-Media Application and Best Comic for Teenage Boys at the 10th Golden Comic Awards this year. The Ministry of Culture began providing support to Taiwanese comics through the Comics Fund Project (漫畫輔導金) last year, with "Shanghai Junior" among the outstanding recipients. In the future, the Ministry aims to work with teams from the Cultural Content Institute to coordinate resources and further promote the development of the Taiwanese comic industry.

Inspired by "Xiaomi Comics Weekly (小咪漫畫周刊)," Huang and some friends came together to start a club they called "Friends of Comics" in 1981. This would mark the start of Huang’s journey into the worlds of design, comics, and illustration. In 1987, he launched the short comic "Blue Rex (藍色雷克)," while also successfully developing a line of merchandise around it, making him one of the early pioneers of IP licensing in Taiwan.

During the 1990s, Huang took the reins of his parents' pharmaceutical factory, opening up a second life for him as a designer, artist, and brand manager who created a new cross-domain marketing model. In the meantime, he continued to hone his talent in his beloved field of comics, and after more than a decade's work, he released "Shanghai Junior" last year. At this exhibition, this comic will be augmented with animation and a theme song, complete with music video, setting a new high-water mark for locally produced comics.

Exhibition and curation consultant Liu Ming-kun (劉明昆) worked with the development team to produce a holographic hip-hop show starring Rex and Xiao-dong, along with a special AR photography area for visitors to take pictures, recorded interviews and exhibits of comic merchandise, and an exclusive cartoon screening of Huang's works. Through all of this, the exhibition aims to help visitors become immersed in the different time periods envisioned by Huang.