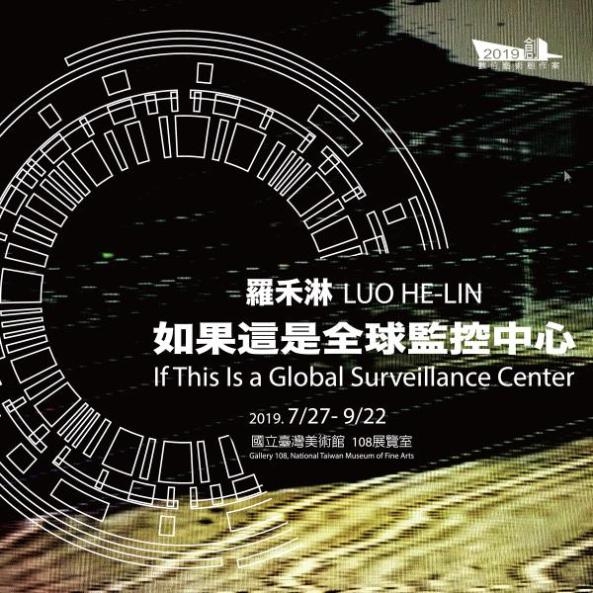 With the support of the National Taiwan Museum of Fine Arts' 2019 Digital Art Creation Competition Program, an interdisciplinary installation called "If This Is a Global Surveillance Center" by interactive artist Luo He-lin (羅禾淋) will be screened at the museum's Gallery 108 from June 7 through Sept. 22.

Under the current state of artificial intelligence and data computation, more and more people have developed a symbiotic reliance on the cloud by living in a cyberspace composed of countless communities, such as Twitter, Facebook, and Instagram. At all times and places, they can connect to "virtual" reality and freely roam the cloud via mobile, enjoying the benefits from the globalization of information and rapid access.

However, the internet is like a double-edged blade, which can also turn users into victims of malicious intent and invasions of privacy. This type of maliciousness is reflected by how those who are plugged into the cloud subsequently submit themselves to being monitored by those who govern the cloud, marking the start of a future in which we are all controlled.

In this online world, people who are not familiar with digital technology might easily transfer their power over to others due to technological asymmetry. Those who control information can then expand their dominance in the "physical" realm. Smart home appliances and home security devices all have the function of an "electronic eye," raising the stakes of malicious monitoring ever higher in the Internet of Things era.

For example, online cam surveillance directory www.isecam.org seems to take advantage of those who are lacking in technological proficiency by using default passwords to tap into security cameras around the world. Therefore, this creative project proposes a three-stage plan to set up a theoretical resistance to such sites.

In the first "Exploration" stage, a reverse lookup shall reveal the codes and IP locations of open surveillance cameras featured on the site, enabling the source code to be collected. The second "Infiltration" stage will use the procedural site index to monitor the physical position of cameras listed in Taiwan for GPS positioning. The final "Public Exposure" stage will not modify the default password of a newly bought surveillance camera to allow the site to arbitrarily index its factory settings and access the footage, which will be an image comprising John Perry Barlow's "A Declaration of the Independence of Cyberspace" and constituting as a reversed invasion of the site.

The reality of the internet is like the "Panopticon" mentioned by Jeremy Bentham, in which we are all strictly controlled by institutional systems. "If This Is a Global Surveillance Center" hopes to enable legal control of information to be cut off by reverse action — to achieve an effective "escape" under the relentless monitoring and to spark more people to reexamine the relations between users and websites, seeing and being seen, and the physical and virtual.

‘Luo He-lin: If This Is a Global Surveillance Center’