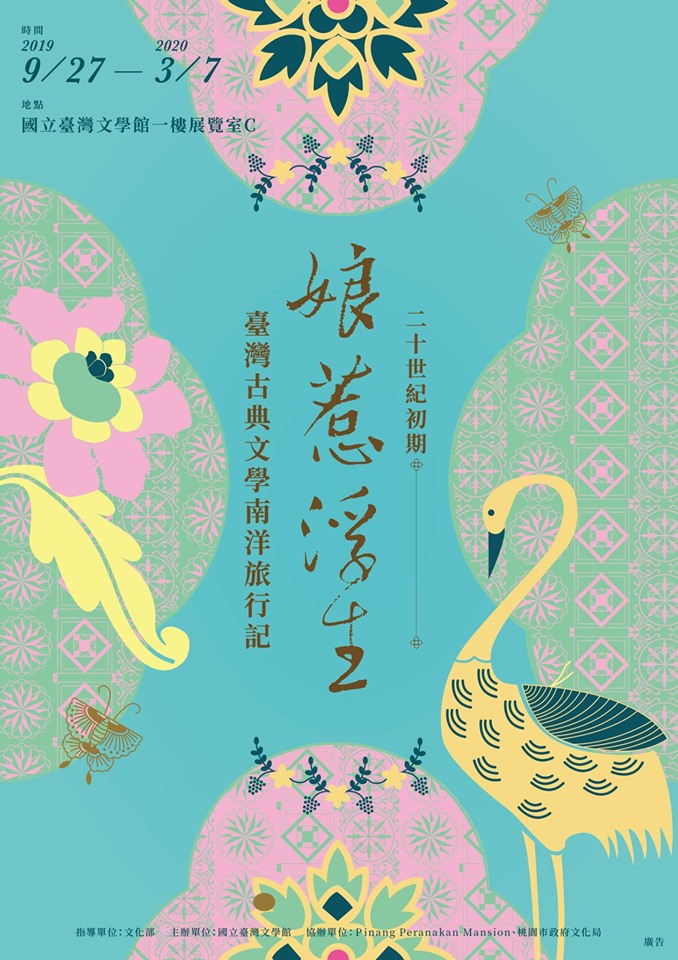 The National Museum of Taiwan Literature is adding a little new romance to Taiwanese classical literature with "Peranakan Diaspora: Classical Taiwanese Literature's Southward Dispersion in the Early 20th Century," which will run from Sept. 27, 2019 through March 7, 2020 in Exhibition Hall C. Rooted in classical poetry, the exhibition takes the distinctive and fascinating female perspective of "Memories of a Nonya (娘惹回憶錄)," a record by Queeny Chang (張福英, 1896-1986) on the connections between the Lin family of Banqiao and the Taiwanese literati against the backdrop of the early 20th century, as well as the links with Southeast Asia that thus arose.

Because of a photo and a pair of gold bracelets delivered in 1912, Lin Ching-jen (林景仁), eldest son of the powerful Lin clan in Banqiao, crossed the oceans to marry Chang, the daughter of an Indonesian rubber tycoon from Medan. Sixty years later, she penned her memoir "Memories of a Nonya," with "Nonya" being a term used to describe female descendants of Chinese immigrants (Peranakan) to Southeast Asia. This exhibition will explore the cross-border connection of these two important families from Medan to Banqiao, sketching the outlines of Southeast Asian travels through classical Taiwanese literature. Through Chang's travels with her husband to Xiamen and around Taiwan, she documented the Lin family's history as they migrated from Taiwan to Xiamen and then out into Southeast Asia.

"Go south, young men," was the dream of Taiwanese merchants in the early 20th century. For the Taiwanese literati, Southeast Asia was a cornucopia containing fabulous flora, coconuts, and betelnuts, and myriad opportunities for business, travels, religious missions, and marriage. Even the poetry of the time was colored with this "jungle fever." The origins of Taiwanese-Southeast Asian interactions can be traced back to 1836, when scholar Tsai Ting-lan (蔡廷蘭) made his way from Penghu to Vietnam. In 1941, after the outbreak of war in the Pacific, the number of Taiwanese literati heading for Southeast Asia reached its peak.

Many writers dedicated their lives to building bridges between the countries and their writings were translated into the local languages, providing an important constituent in the popularization of Taiwanese literature. "Peranakan Diaspora" will feature Chang's manuscripts and items from the NMTL collection, along with embroidered Nonya clothing and beaded shoes on loan from the Pinang Peranakan Mansion.

Taiwanese literati traveling to Southeast Asia encountered more than just new geography and customs, their writings also helped spark new ideas and movements across Southeast Asia. The lilting emotions of the Nonya are made up of an intricate interweaving of famous families and the cross-border migration of classical literature, like a travelogue of an important Taiwanese literary era, and their contributions to Taiwanese literary history will continue to shine on.