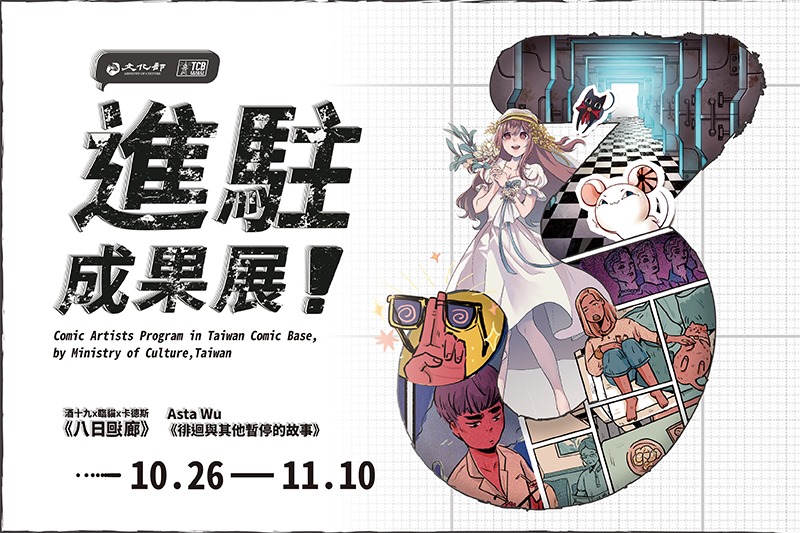 The Taiwan Comic Base has hosted its third round of residency opportunities this year from August through September. Illustrator Asta Wu (吳雅怡) and a three-person team led by cartoonist Zhou De-rong (周德容) will showcase their completed residency projects on the third floor of the Taipei-based venue from Oct. 26 through Nov. 10.

During her residency, Wu created new works with deep-rooted local characteristics that reflect the cultural essence of Taiwan. Her work "Lingering hesitation and other stories on hold (徘徊與其他暫停的故事)" integrates Taiwanese religious, folk, and fantasy elements to present her concern over the survival of such folk traditions. Through her comics, she is also able to illustrate her creative process and inspirations to share with the audience.

Together with scriptwriter Lin Mao (臨貓) and game designer Ka De Si (卡德斯), cartoonist Zhou, who also goes by the name Jiu Shi Jiu (酒十九), created "8 Day Corridor (8日迴廊)," an escape room board game based on the events of World War II with illustrative elements. Players will be able to understand the characters and the world that the trio have created through the illustrations, while also participating in the game to determine the final outcome of the story.

Director Chen Ying-fang (陳瑩芳) of the Ministry of Culture's Department of Humanities and Publications explained that there will be four sets of residency opportunities per year and currently three rounds have been completed, culminating in the production of ten new creative works. Several artists have been offered publishing contracts and others, like Arwen Huang (阿文) and Bankota Cheng (鄭硯允), have successfully collaborated with hotel operators for exhibitions, altogether reflecting the diverse potential of Taiwanese cartoonists.

The third set of artists-in-residence revealed a variety of styles and unlimited creativity through eye-catching works and imaginative presentation format and content. In light of their impressive creations, the Ministry of Culture will also organize matchmaking workshops to find potential buyers and collaborators. Many international organizations have also expressed interest in exchanging resident artists after experiencing the artistic energy of the Taiwan Comic Base.

Wu explained that her previous works mainly focused on illustrations and picture books, and she tried creating two longer comic pieces for the first time during residency. She pointed out how she was really inspired by the other participating artists and Taiwan Comic Base's creative synergy, which made her eager to create more comic works as well.

Zhou remarked she wanted to use this rare opportunity to work with scriptwriter Lin Mao and game designer Ka De Si. Together, they started from original scriptwriting to connect comic art with board games in a successful cross-domain collaboration. Two escape room board game sessions are being arranged at the Taiwan Comic Base on Nov. 2 and Nov. 9. Interested parties can register for the free sessions here.

The Ministry of Culture's "Comic Artists Program in Taiwan Comic Base" selects up-and-coming artists through open calls, and offers a dedicated space on the building’s 4th floor for producing works and connecting with other artists. By providing resources and award incentives, the Ministry wanted to give cartoon artists the freedom to create without reservations.

The fourth set of talented artists has joined the Taiwan Comic Base and everyone is looking forward to a new wave of completed residency projects. More information is available at https://tcb.culture.tw/.