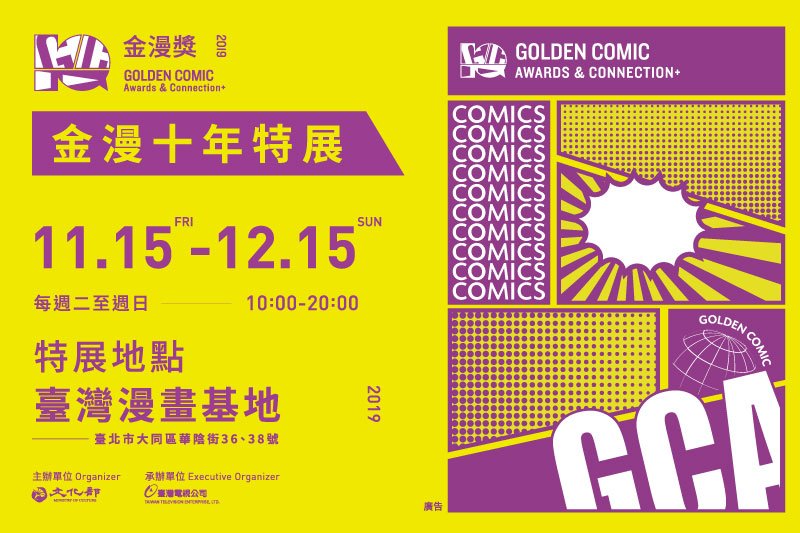 In celebration of this year being the tenth year of the Golden Comic Awards, the Ministry of Culture will be holding a special retrospective exhibition on the GCAs' first illustrious decade from Nov. 15 to Dec. 15 at the Taipei-based Taiwan Comic Base.

As the nation's highest artistic honor for comics, the Golden Comic Awards is witness to the breakthroughs and transformations of original Taiwanese comics throughout the years, and special zones have been curated for this exciting 10-year anniversary exhibition:

In addition to special symposiums and lectures, the exhibition is highly interactive, with reading zones that showcase the winning entries of the past ten years, as well as a rare collection of translated editions of Taiwanese comics.

"Cross-Media Application Works" will also highlight interdisciplinary works such as 3D animation and a stage play adaption of "Taiwan Hero (諸葛四郎)," a board game based on "Scrolls of a Northern City (北城百畫帖)," holographic projections of "Dragon Swordsman vs. The Mistery Man (龍泉俠大戰迷霧人)," a live-action adaptation of "The Summer Temple Fair (神之鄉)," and a comic derived from the Taiwanese glove puppetry show "Pili Fantasy War of Dragon (霹靂英雄戰紀)."

To offer a glimpse into the inner creative minds of the award winners, there will also be three special symposiums for featured artists to interact with audience members.

Come by the Taiwan Comic Base for a walk down history lane and review the brilliant transformation of the Golden Comic Awards over the past ten years. Exhibition-goers will also receive a commemorative badge when they share posts or check-in on social media.

‘The GCAs: An Exhibition of the First 10 Years’