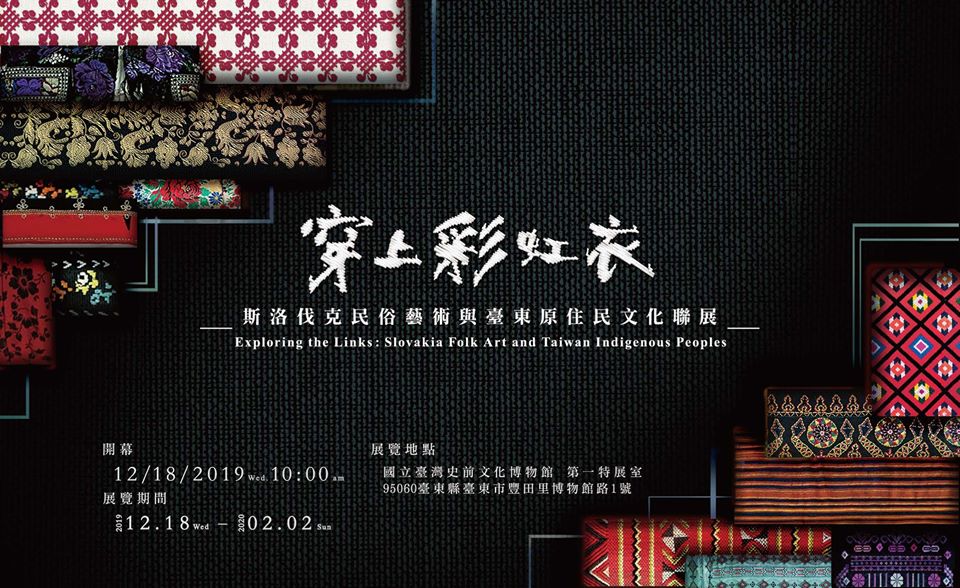 An exhibition called "Exploring the Links: Slovakia Folk Art and Taiwan Indigenous Peoples" will kick off at the National Museum of Prehistory (NMP) in Taitung County on Dec. 18. Different from other events organized by the Slovak Economic and Cultural Office in Taipei, this is a joint effort that features the central European country's embroidered folk costumes and the multi-patterned traditional attire of Taiwan's indigenous tribes.

As the event's co-organizer, the NMP has chosen to highlight the Puyuma's woven clothes that feature cross-stitch embroidery and the elaborately beaded outfits of the Paiwan people. The Slovak Economic and Cultural Office in Taipei, on the other hand, has selected Slovakia's centuries-old traditional clothing, knitting tools, daily appliances, and musical instruments.

Calling the exhibition a "dialogue" between Slovak folk art and the culture of Taiwan's indigenous tribes, NMP Director Wang Chang-hua (王長華) said that the NMP appreciates the cultural diversity of Taitung and therefore seeks to enrich its exhibitions with the inclusion of indigenous cultures.

Slovak Representative Martin Podstavek added that the 12 sets of folk costumes on display are all made with bright colors, exquisite embroidery, and rich patterns that fully reflect the culture of the mountainous country.

Apart from the rich offerings of Slovakian and Taiwanese cultures, the opening ceremony of the exhibition featured a special performance of the UNESCO-inscribed intangible heritage of Fujara — a large folk flute ranging from 160 to 200cm long that is traditionally played by Slovak shepherds.

Slovakia has attached greater importance to cultural traditions in recent years, Podstavek said, adding that with the successful launch of the Taitung exhibition, he hopes such fruitful collaborations will continue with the Taitung County Government and the National Museum of Prehistory.