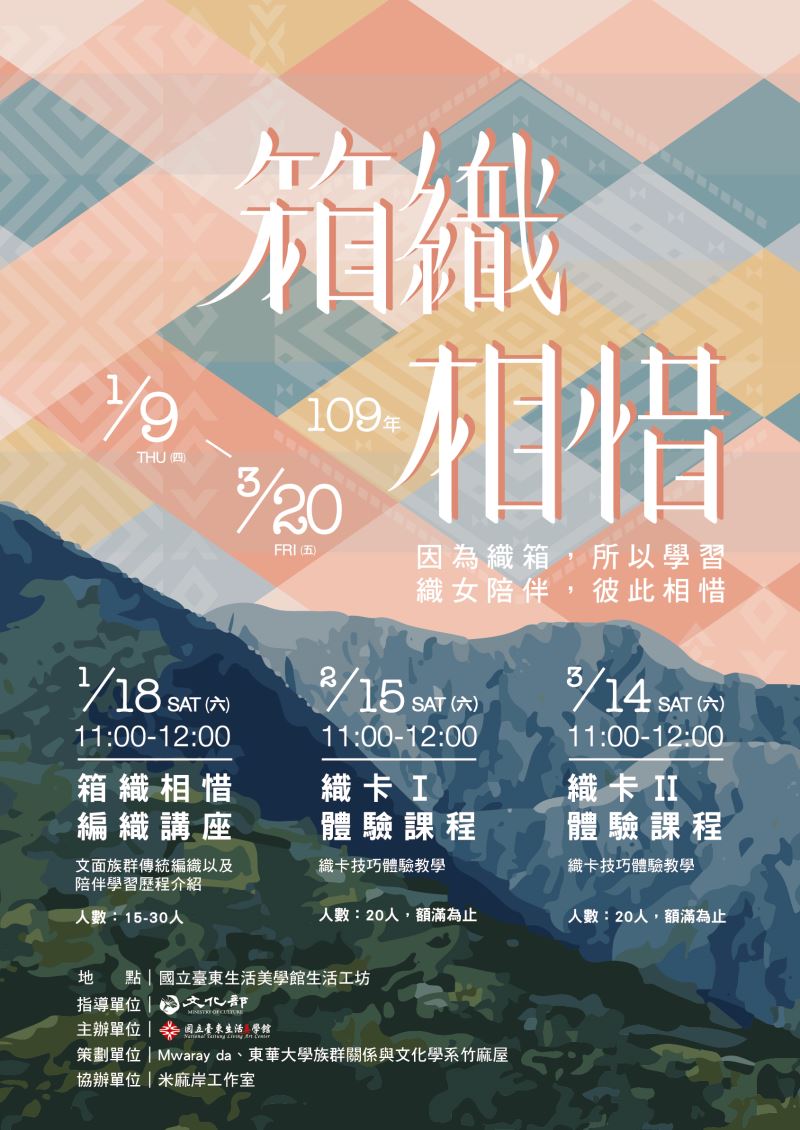 "Weaving Wonders: A Special Exhibition on the Weaving Mentorships of Taiwan's Tattooed Tribes" will run from Jan. 9 to March 20 at the National Taitung Living Arts Center. The public is invited to take in the weaving cultures of Taiwan's tattooed tribes and listen to the stories of how this heritage is passed down through women, with a particular focus on the box weaving — known in their language as ubung —of the Truku people

Known for their facial tattooing practices, the two indigenous tribes represented in this exhibition are the Truku and the Atayal. Weaving is also among the defining characteristics of these two groups, however with the introduction of market capitalism via the early colonial settlers, weaving as a source of livelihood began to gradually fade away. In 2015, a group called "Mwaray da" was formed by the Truku village of Kulu in the Xiulin Township of Hualien County. This group sparked a revival of this ancient art.

Founder Meyci Yusi (宋美枝) learned to weave from tribal elder Rowbiq Awi some 20-plus years ago, and the experience made her profoundly aware of the vital role of indigenous elders in keeping traditions alive. Inspired, she began working alongside women from her village, teaching them the craft of weaving in a similar mentorship. Some of her students then went on to teach younger weavers themselves. And so the craft spread like branches extending from a trunk, blossoming into a women-driven effort to pass on this piece of cultural heritage.

The exhibition will feature the works of Meyce Yusi and eight of her fellow weavers. Each of the women is presenting two pieces, one qabang (blanket, 被單) and one pala (cloth, 布匹). Qabang are generally large blankets composed of three sheets of woven fabric stitched together. Among the Truku, qabang are traditionally prepared by the mother or grandmother of a young girl about to be married as dowry, with a greater number of qabang demonstrating higher status.

Pala, meanwhile, are single sheets of box-woven cloth used for a variety of purposes and embellished with a variety of creative patterns. The pieces chosen for display showcase a range of Truku and Atayal weaving techniques, their designs and colors telling stories of childhood, families, and lives in the mountains from weavers' memories.

In addition to the qabang and pala on display, this exhibition also includes two hands-on DIY sessions for those yearning to learn a bit more about the crafting techniques, as well as a talk on weaving culture, all free to the public.