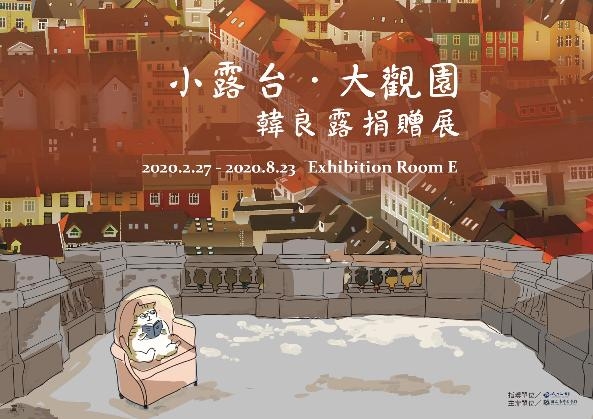 Inspired by the liveliness in East Village, one of New York City's most dynamic neighborhoods, the late Taiwanese food writer Han Liang-lu (韓良露) founded a social enterprise called South Village (南村落) in the summer of 2007 in Taipei to promote Taiwan's food culture and lifestyles. Now, 14 years later, an ambitious exhibition shall help viewers explore the life, work, and legacy of the Kaohsiung-born author and see the world through her eyes.

Titled "Small Terrace & Garden with a View: Exhibition of Donated Works by Han Liang-lu," the displays provide tangible intimacy with Han, who passed away in 2015, through the presentation of her early manuscripts, scripts, lyrics, and rare group photos of her, late writer and social activist Yang Kui (楊逵), and other prominent literary figures. The exhibition also includes an astrocartography map with her handwritten notes and original writing materials, all of which were donated by the late author's husband Chu Chuang-pin (朱全斌).

In addition, the Tainan-based National Museum of Taiwan Literature exhibition has recreated a living room, kitchen, bedroom, and terrace to illustrate the settings that lent to the diversity and richness of Han's creations. Her works have won prizes such as the Taipei Literature Award and even a Golden Bell Award — Taiwan's equivalent of the Emmys.

Su Shuo-pin (蘇碩斌), director of the museum, said that before the advent of contemporary phrases like "hipsters (文青)," "indie film fests (獨立影展)," "backpacking (自助旅行)," "feminism (女性主義)," and "slash (斜槓)," a term referring to people who take up multiple jobs, Han had led generational trends by organizing film festivals on her own, making documentaries, participating in small theaters, and writing a column that displayed her feminist views.

The versatile writer later made the jump to screenwriting for television and films and publishing her writings. The topics she touched upon spanned from food to travel and astrology, exuding the richness and exuberant positivity in her life, Su said.

Through her role as a writer, Han encouraged her readers to develop their personal tastes and created a new writing genre that describes lifestyles, the director concluded.