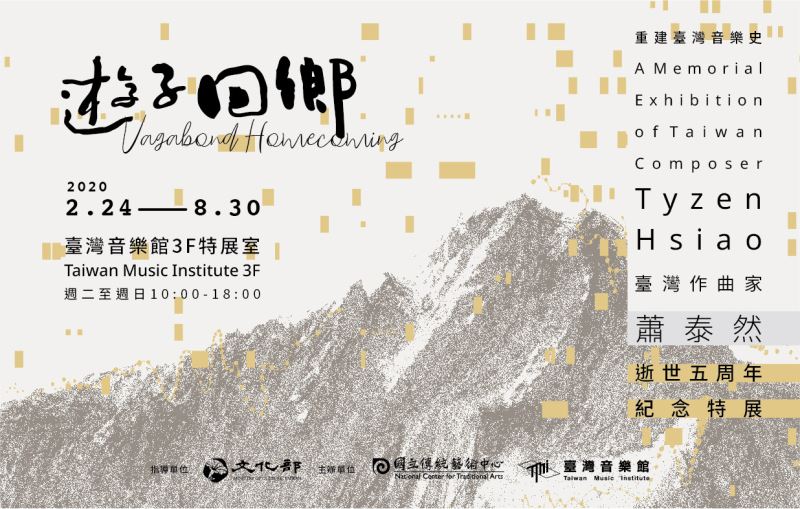 To commemorate the fifth anniversary of Taiwanese composer Tyzen Hsiao's (蕭泰然) passing, the Taipei-based Taiwan Music Institute will be holding a special exhibition titled "Vagabond Homecoming: A Memorial Exhibition of Taiwan Composer Tyzen Hsiao" from Feb. 24 through Aug. 30. The exhibition will be showcasing rare manuscripts, handwritten notes, photos, and letters of Hsiao for exhibition-goers to immerse themselves in the life and creative legacy of this Taiwanese maestro.

At the opening ceremony of the exhibition on Feb. 24, National Center for Traditional Arts Director Chen Chi-ming (陳濟民) remarked that because Hsiao was able to successfully integrate local Taiwanese music with western-style music to create a unique representation of the expressive music of Taiwan, he inspired other Taiwanese musicians to continue to interpret the classic creations of this land.

The Taiwan Music Institute has been planning for this exhibition since early last year, with Director Chen making a trip to the United States to work with Tyzen Hsiao Foundation (蕭泰然基金會) and family members, culminating in the selection of 120 items of memorabilia to be transported to Taiwan for this special showcase.

Accomplished pianist, music educator, and Taiwan Public Television Service (PTS) Chair Tchen Yu-chiou (陳郁秀) reminisced about her first encounter with Hsiao during a memorial concert dedicated to the February 28 Incident, where she perform his "Concerto in C minor for Piano." This powerful music piece reflected Hsiao's nostalgia and love for his hometown and touched Tchen deeply, for Hsiao's music is stirring and moving while still retaining the essence of the Taiwanese spirit, Tchen added.

Stephen Hsiao (蕭傑文), the composer's second-eldest son, was also in attendance at the opening ceremony. He addressed the audience in both Taiwanese and English to express his thanks and mentioned that it was particularly meaningful to launch the exhibition on Feb. 24, as it was the very day that marked the fifth anniversary of his father's passing. Stephen Hsiao remarked that his father devoted his life to music as a whole and wrote fragments of his life stories into his compositions.

Taiwan Music Institute Director Weng Chih-tsung (翁誌聰) commented that Hsiao was able to create a new page in Taiwan's music history. The special exhibition will be made up of five sections covering Hsiao's personal life, family life, hometown and friends, faith and works, and awards, he added.

In addition to manuscripts of important works from each period in Hsiao's life, there will also be memorabilia on display including pens, reading glasses, CD players, and handwritten notes. With Hsiao's melodic works playing in the background, exhibition-goers will be able to fully explore his musical universe through this six-month showcase.