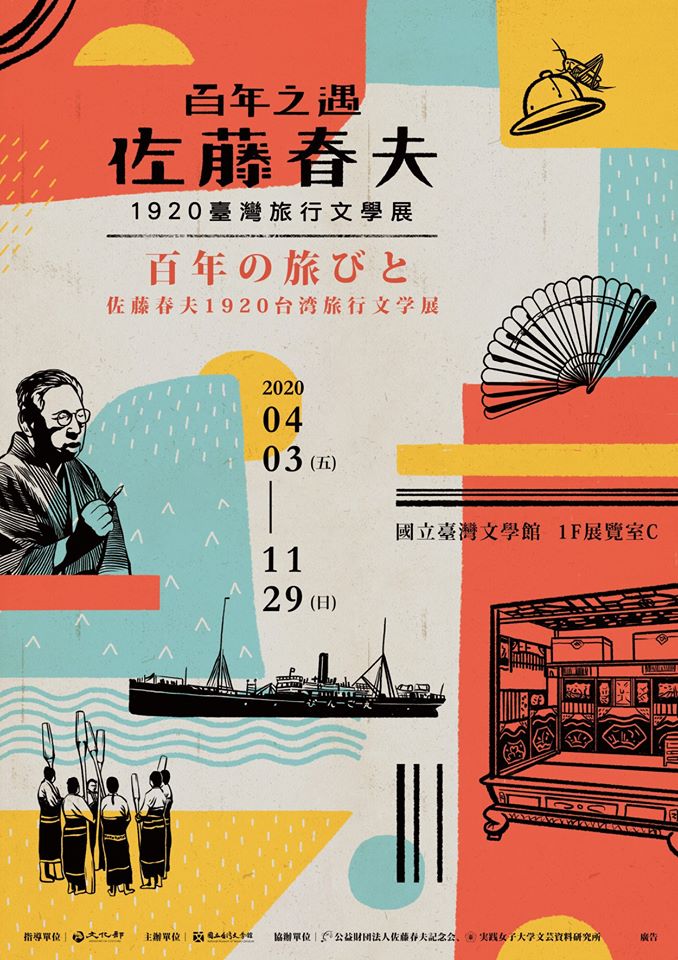 The National Museum of Taiwan Literature invites visitors to travel back in time through the eyes of Sato Haruo (佐藤春夫, 1892-1964), a late Japanese literato who visited Taiwan in 1920. More effective than pictures of scenic vistas, Sato's words captured the essence of Taiwan's folk culture under Japanese rule. Curated for visitors to consider Taiwan's cultural landscape within its historical context, the exhibition begins its journey at the Tainan-based museum on April 3 and runs through Nov. 29.

Titled "Taiwan A Hundred Years Ago: A Look Back at 1920 Through Sato Haruo’s Travel Literature," the exhibition will look at local folklores and beliefs that Sato learned during the time he traveled across Taiwan, which, together with his description of local gentry and indigenous tribes from mountainous areas, will provide rare insights into how Taiwan looked a century ago.

Sato documented the sights and scenes that he saw by taking ferries and trains along on his journey, including detailed descriptions of pestle-pounding performances of the Bunun tribe's traditional instrument tutul (杵音) at Sun Moon Lake. His writings afford a glimpse into the gifted author's private refections on the arts, traveling, and the purpose of life.

Highlights of the exhibition include Sato’s books such as "Wushe (霧社)" and "The Traveler (旅人)” and his novel "Strange Tale of the Bridal Fan (女誡扇綺譚)." While "Wushe" and "The Traveler" cover Taiwan's social and cultural history, nature, and landscapes from the early 20th century, "Strange Tale of the Bridal Fan" outlines a dark and spooky Tainan, contrasting the sunny demeanor of the centuries-old town today.

Inspired by "Strange Tale of the Bridal Fan," two Taiwan-born Japanese writers — Niigaki Kouichi (新垣宏一) and Kyu eikan (邱永漢) — followed in Sato's footsteps by describing Tainan as a city with a mysterious and infectious charm.

Su Shuo-pin (蘇碩斌), director of the National Museum of Taiwan Literature (NMTL), said this exhibition encompasses a bountiful collection of Sato's masterpieces and original manuscripts that are set to made their first public appearance.

Apart from audiovisual materials on the Japanese novelist, his photos, self-portraits, and personal correspondence with prominent Japanese writers such as Junichiro Tanizaki (谷崎潤一郎) and Osamu Dazai (太宰治) will also be on view.

Made possible by NMTL, the Sato Haruo Memorial Museum in Japan, and Tokyo-based Jissen Women's University, the exhibition seeks to introduce Japan's literary landscape to Taiwanese readers, while encouraging reflection on Taiwan's developmental trajectory under Japanese colonial rule from 1895 to 1945, Su noted.