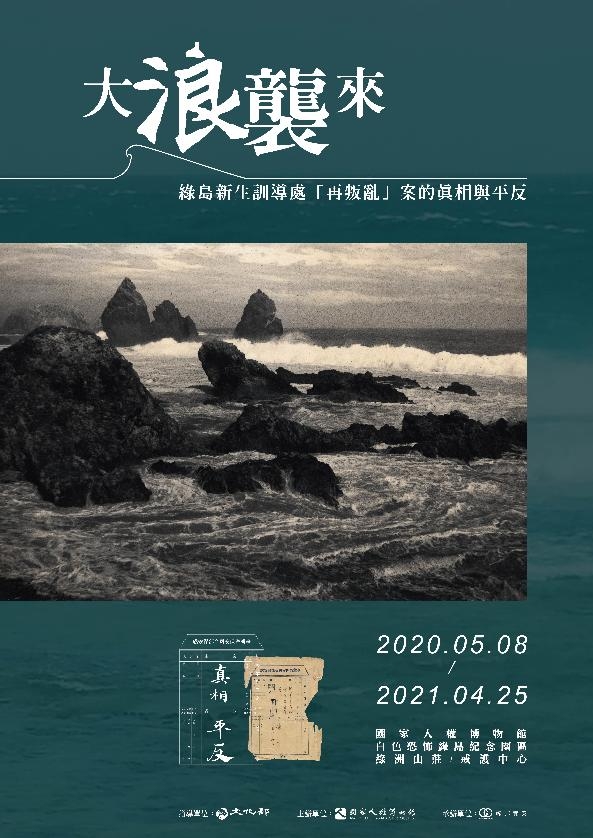 A special exhibition on a lesser-discussed "second revolt (再叛亂案)" that took place at Green Island's New Life Correction Center (新生訓導處) in the 1950s will run from May 8, 2020 to April 25, 2021 at the windswept island, which was once the location of a governmental prison for political dissidents during the White Terror era.

Organized by the New Taipei City-based National Human Rights Museum (NHRM), the exhibition is aimed at boosting awareness of the plight of the fallen prisoners who were subjected to torture and forced labor at the islet off Taiwan's east coast when martial law was enforced from 1949 to 1987.

To present a fuller perspective and detailed context of the "re-rebellion" staged by the center's prisoners from 1953 to 1956 — and to decode how these prisoners were capable of subverting the government "again" when they were already put behind bars and under surveillance — the exhibition is organized into five sections focused on different aspects of the insurgency that ended in the execution of 14 prisoners.

The themes of the five sections are: "Life After Calamity: Green Island's Forced-Labor and Concentration Camps," "Green Island and the Global Undertow," "Destined to Fail: The Patriot Movement," "When Immense Waves Struck: Rebellion at Green Island," and "Repercussions and Rehabilitation."

Explaining the museum's motivation for holding an exhibition highlighting one particular incident, NHRM Director Chen Chun-hung (陳俊宏) said that the rebellion has its own historic uniqueness. For one, the incident has been brought up by a number of former political prisoners from time to time since the lifting of martial law, but research on the incident remains rare, Chen noted.

Secondly, it is hoped that by examining the nature of the "uprising," members of the general public can reflect upon on whether the government can legitimately deprive people of their basic human rights in the name of national security, the director stated.

Curator Lin Chuan-kai (林傳凱) said by presenting structured interviews with survivors alongside declassified historic files, he seeks to unveil the truth of the incident and the enablers to the brutality carried out on Green Island, where thousands of people were once forcibly detained. Lin said he also wants to pay tribute to the young lives that were lost too soon.

In conjunction with the exhibition, a series of lectures will be held at Taichung, Tainan, Kaohsiung, and two NHRM-affiliated facilities — Jing-Mei White Terror Memorial Park and Green Island White Terror Memorial Park. In addition, while cultural activities are largely on pause during the COVID-19 pandemic, virtual tours to NHRM and its affiliated sites are being rolled out throughout the latter half of this year.