‘Rebellious Brushes: Anniversary Exhibition of the Anti-ELAB Protests in HK’ 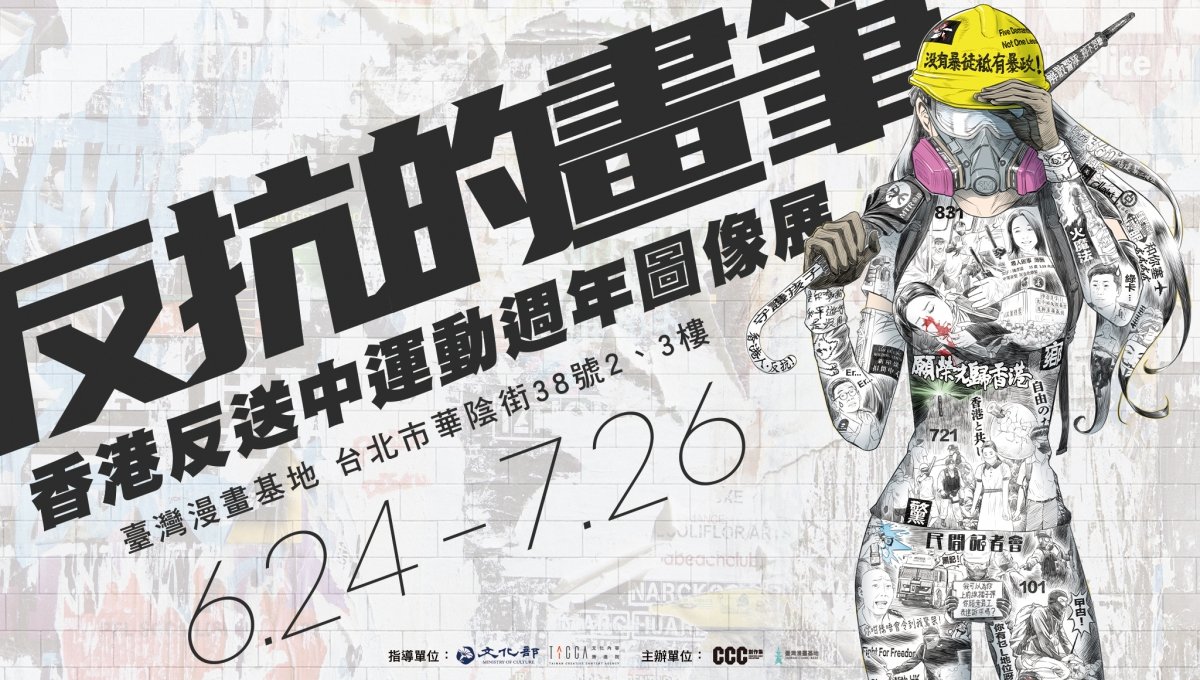 
A special exhibition in support of the ongoing Hong Kong protests will take place in Taipei from June 24 through July 26. Titled "Rebellious Brushes: Anniversary Exhibition of the Anti-ELAB Protests in Hong Kong (反抗的畫筆──香港反送中運動週年圖像展)," the event features about one hundred artworks, posters, and protest memorabilia by 66 creators from the harbor city, Taiwan, and South Korea.

Ongoing in Hong Kong since June 2019, the demonstrations have grown into a much broader pro-democracy movement. The Taipei exhibition has chosen "The Heroine (女勇武)" — a famous protest piece illustrated by Hong Kong artist Kai Lan Egg (芥蘭炒雞蛋) — as its main visual identity as it strives to faithfully present how artists capture the city's unprecedented, self-organized resistance sparked by a now-withdrawn extradition bill.

To be held at the Taiwan Comic Base, the powerful display will explore what will become the legacy of the protests in the semi-autonomous region and how the enduring imagery of protesting citizens wearing goggles, helmets, and gas masks has shaped the art scenes of other countries. It will also display publications created by Hong Kong artists, authors, activists, and society members, giving viewers a glimpse of first-hand experiences on the ground during the leaderless movement.

A special section highlighting posters and pamphlets relating to the protests will also take place alongside the exhibition. Named "18 Yellow Objects," the display was inspired by documented acts of police brutality observed during clashes between unarmed protesters and the police in Hong Kong. The term "yellow object (黃色物體)" has been circulating on social media since September 2019 after a police official referred a man in a yellow shirt, whom officers are accused of kicking in a video, as such.

Meanwhile, a VR gaming installation called "Liberate Hong Kong" that simulates the protests of Hong Kong will also be available at the exhibition, enabling visitors to experience life as a front-line street protester hounded by riot police.

Together with a digital Lennon Wall, replicas of facilities that have taken new meaning in the context of Hong Kong's protests, such as an underpass at Kwai Fong railway station, Hong Kong Police Headquarter, Price Edward underground station, and a sign that reads "Kwai Yan Road" will also be staged at the exhibition.

In addition, a series of special talks will be held on July 4, 11, and 18 at the comic base, where the exhibition's curator Chen Yi-ching (陳怡靜), Taiwanese cartoonist Stellina Chen (陳筱涵), National Taiwan University sociology professor Ho Ming-sho (何明修), among others, will shed light on the yearlong democratic movement from their respective vantages.


All attendees to the exhibition will be required to wear a surgical mask and have their temperature monitored. Guided tours for groups with at least of ten but no more than 30 participants are available in English and Japanese with a one-week advanced booking.