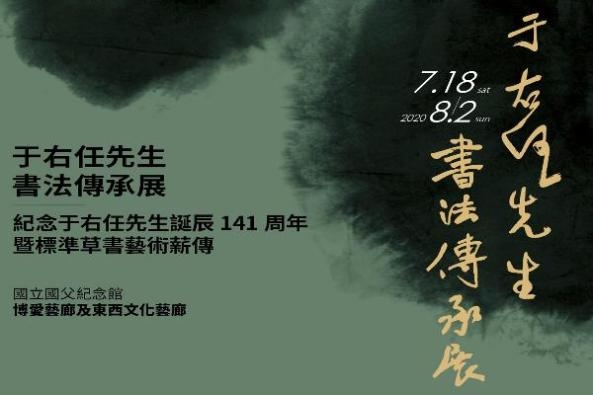 On display are a total of 170 calligraphy works, among which are 11 works by Yu and some pieces by Yu's inside disciples, including Liu Yian-tao (劉延濤), Hu Kung-shih (胡公石), Lee Pu-tong (李普同), and Kanazawa Sike (金澤子卿).

Also on view are pieces recommended by Yu style cursive calligraphy promotion groups in China and Japan, and works by winners of calligraphy competitions held by the Chinese Standard Cursive Script Association.

Born in Shanxi Province, China, in 1989. Yu became a provincial graduate of the imperial examinations of the Qing Dynasty at the age of 17. He started out practicing the calligraphy styles of famous calligraphers Wang Hsi-chih (王羲之), his son Wang Hsien-chih (王獻之) of the Jin Dynasty (266-420), and Chao Meng-fu (趙孟頫) of the Yuan Dynasty (1206-1368), and later he took on ancient calligraphic style called Northern Tablets (北碑) of the fifth and sixth centuries.

Soaked in this unique style, Yu developed his own cursive calligraphy. He dedicated majority of his time to practicing cursive script, having reached his middle age. The late calligrapher established the Standard Cursive Calligraphy Society (標準草書社) in 1932, and he also compiled "The Thousand-Character Essay in Standard Cursive Script (標準草書千字文)" in 1936 to provide a guide to the artistic shorthand script.

SYSMH Director-General Liang Yung-fei (梁永斐) lauded Yu as a preserver of Chinese calligraphy as well as an creative calligrapher. He pointed out that Yu had created numerous calligraphic inscriptions in cursive style. Yu's calligraphy is also preserved as inscription on title plaque at temples and academic establishments, including those for the Xingtian Temple and the Chung Hui Hall (寵惠堂) as well as Soochow University in Taipei.

Liang added that Yu was the one with most profound influence among the many young intellectuals with literary and calligraphy attainments who joined Dr. Sun Yat-sen in the revolution and creation of the republic. As a young man, Yu took the risk to establish newspapers to condemn the culture of corruption of the imperial government and to propagate revolutionary ideas. He had later served as President of the Control Yuan, Taiwan's highest watchdog body, for 34 years – the longest tenure in the institution's history.