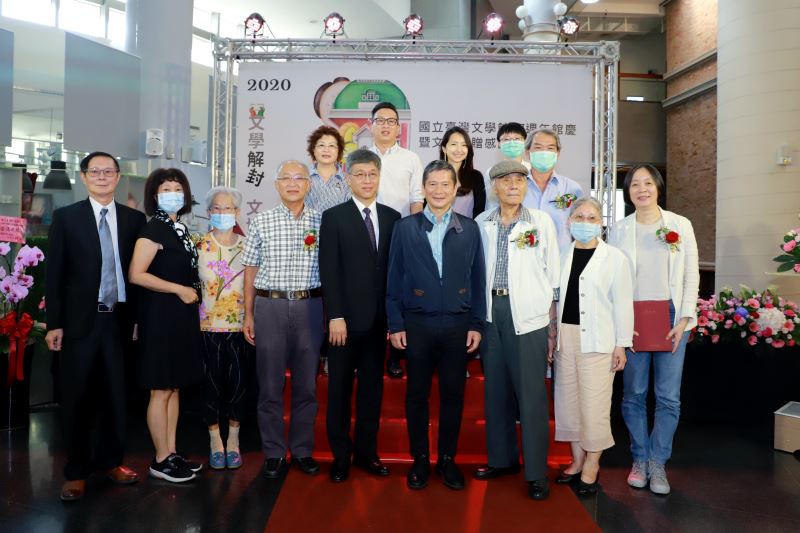 The National Museum of Taiwan Literature (臺灣文學館) in Tainan City held a series of activities, under the theme "Literature re-opening, Taiwan Cultural Association 99 (文學解封‧文協九九)," on Oct. 17, marking the 99th founding anniversary of the Taiwan Cultural Association (臺灣文化協會), which coincided with the 17th anniversary of the national museum dedicated to literary arts.

99-year-old activist and writer Zhong Yi-ren (鍾逸人), who was born in 1921, the same year when the Taiwan Cultural Association was established, and several other writers and family members of late writers, including Lin Jai-yi (林嘉義), Lin Zhang-feng (林章峯), Lu Pei-yu (呂佩玉), Huang Zhen-nan (黃振南), and Clara Wan-shun Shih (石婉舜), attended the opening ceremony and donated literary manuscripts to the museum collection. Each of them received a certificate of appreciation from the museum.

Zhong, who donated the original manuscripts of his autobiographical novels, letters, and photos, was invited to speak at the ceremony.

Culture Minister Lee Yung-te thanked the writers for their selfless donation, and assured them these cultural relics will be properly preserved, researched, and exhibited.

Lin Jai-yi (林嘉義), son of late Taiwanese playwright and director Lin Tuan-chiu (林摶秋), donated many of his father's theater and film script manuscripts. Director Lin Tuan-chiu was active in Taiwan's New Drama Movement and had directed many Taiwanese-language films. His classic films are well-known for their compelling stories, diverse camera movement, and carefully-designed composition. Lin Jai-yi also thanked the Ministry of Culture and scholar Clara Wan-shun Shih (石婉舜), who pioneered the study on director Lin, for stressing the importance of cultural mementos .

Lu Pei-yu (呂佩玉), daughter of late Taiwanese poet Lu Zuo-qi (呂左淇) , also expressed her gratitude to the Ministry and the museum. She mentioned that she was grateful because in the process of making the donation, she got a chance to be reacquainted with her father's writings and poems.

The series of activities kicked off with the donation ceremony in the morning. An outdoor bazaar featuring cultural and creative products was open to the public. In the afternoon, a concert with community and tribal elders performing folk lyrics and indigenous songs was held in the museum, and the evening program was outdoor cinema showing.