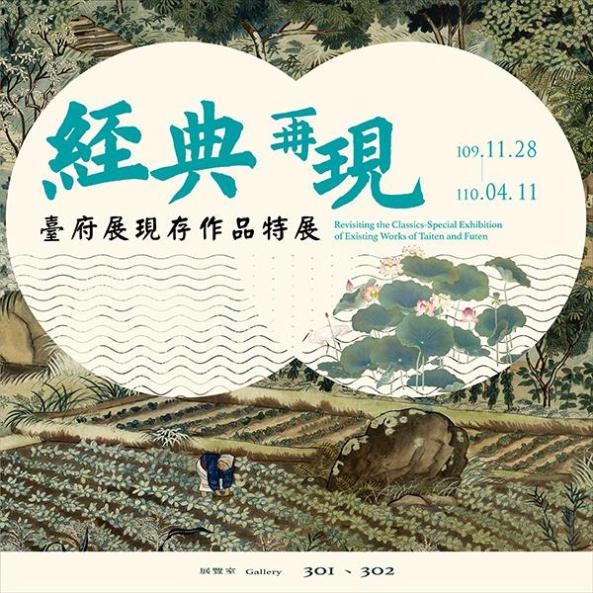 The National Taiwan Museum of Fine Arts (NTMoFA) will present a rich collection of artworks and cultural archives from the period of Japanese rule at the Taichung-based gallery from Nov. 28, 2020 to Apr. 11, 2021.

Titled "Revisiting the Classics – Special Exhibition of Existing Works of Taiten and Futen," the exhibition brings together artworks selected for the "Taiwan Fine Arts Exhibition (Taiten)" from 1927 to 1936 and "Governor-General's Art Exhibition (Futen)" from 1938 to 1943.

The months-long display will be divided into two categories, "Toyoga" and "Seiyoga," while the former is set to present the artworks by artists who practiced Eastern-style painting, the latter will showcase the pieces by painters who embraced or were under the influence of Western-style drawing techniques.

The efforts to make the important records of Taiwan's art scenes, once scattered over places, better known and properly preserved began with a 2019 project called "Return of the Taiwan Fine Arts Exhibition: Classic Paintings Revisited (臺展復刻‧經典再現)."

Spearheaded by the NTMoFA, the project is part of the initiative "Reconstruction of Taiwan's Art History" of the Ministry of Culture to document the nation's progression in the arts and to preserve such history and culture under the central government's "Forward-looking Infrastructure Development Program (前瞻基礎建設計畫)."

In March, 2020, the NTMoFA published three collections encompassing the Taiten and Futen catalogues, timelines detailing exhibition's major events, historical photos, and research on how Taiwan's arts evolved during the first half of the 20th century.

During the period of Japanese rule, by the time a new art movement was under way, there were no art colleges in Taiwan. Events like the Taiwan Fine Arts Exhibition therefore served as a forum where art enthusiasts traded ideas and emerging artists were given a chance to shine on stage.

From 1927 to 1936, the Taiwan Education Association (臺灣教育會) had been the organizer of the Taiwan Fine Arts Exhibition. In 1938, the education bureau under the Government-General of Taiwan, the highest governing body at that time, took over and held the annual event for the next six years.