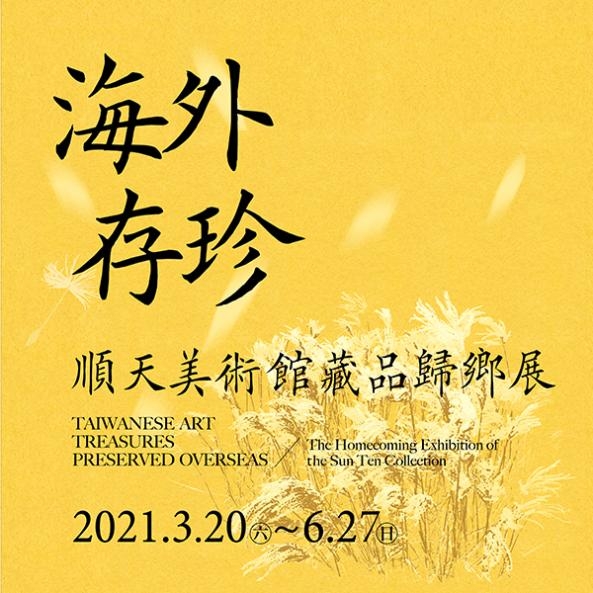 The National Taiwan Museum of Fine Arts (NTMoFA) in Taichung will hold the "Taiwanese Art Treasures Preserved Overseas – The homecoming Exhibition of the Sun Ten Collection (海外存珍-順天美術館藏品歸鄉展)" from Mar. 20 to Jun. 27. On display will be 232 pieces of artworks by 195 Taiwanese artists born between 1871 and 1989, collected by Sun Ten Museum in Irvine, California.

Sun Ten Museum was founded in 1996 in commemoration of Dr. Hsu Hong-yen (許鴻源). The late pharmaceutical entrepreneur was a devoted supporter of Taiwanese artists and he had collected and preserved more than 600 pieces of artworks from Taiwanese artists when there were no public modern art museums in Taiwan. After Dr. Hsu's demise, his wife founded "Sun Ten Museum" to display and promote the artworks. Eventually, to honor Dr. Hsu's final wish and to help reconstruct Taiwanese art history, his family decided to donate the entire collection to Taiwan.

The Hsu family's donation coincided with former Minister of Culture Cheng Li-Chiun's pledge on reconstructing Taiwanese art history. Together with the support from Minister of Culture Lee Yung-te, the public and private sector has made concerted efforts and accomplished the mission of passing on cultural heritage.

The artworks on display will be organized chronologically and divided into four main sections with different themes - luxuriance, diversity, brilliance and emergence.

The section "luxuriance" presents artworks which were created by artists who lived in Taiwan under Japanese colonial rule and those who were born in Mainland China and migrated to Taiwan after 1949. "Diversity" section highlights a total of 43 artists born between 1921 and 1935, who lived in a period of radical change after the rise of self-determination movements in the 1920s and the political imbroglio from 1945 to 1949.

The 43 artists presented under "brilliance" section were born between 1936 and 1944. Many of them were deprived of education during the years of war and turbulence. The artworks from artists who were born between 1945 and 1989 are placed under the "emergence" section. They belong to the post-war generation and have witnessed Taiwan's social, economic and political developments. Among these artists, some stayed in Taiwan, and some have chosen to reside abroad.

Additionally, NTMoFA also presents the achievement of the implementation of the Ministry of Culture’s policy on reconstructing Taiwanese art history since 2017.