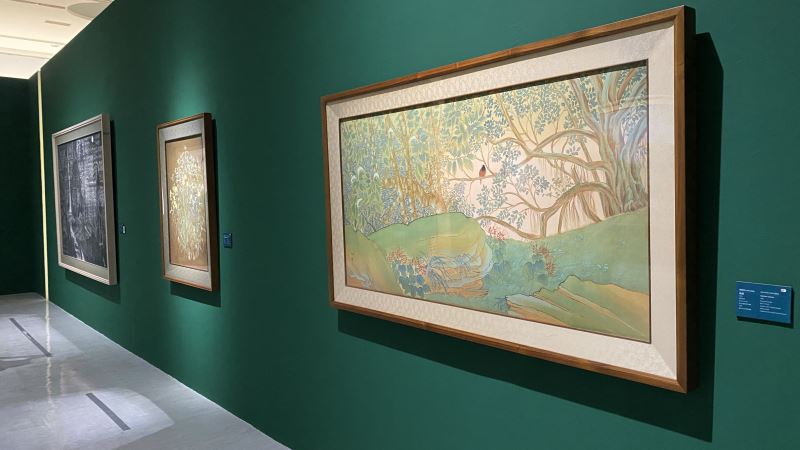 The National Taiwan Museum of Fine Arts (NTMoFA) in Taichung is presenting the exhibition titled "Revisiting the Classics – Special Exhibition of Existing Works of Taiten and Futen (經典再現-臺府展現存作品特展)" from Nov. 28, 2020 to April 11, 2021. Showcasing the classic works by Taiwanese artists in the first half of the 20th century, the exhibition features works of renowned painters Kuo Hsueh-hu (郭雪湖) and his spouse Lin A-Chin (林阿琴).

"Revisiting the Classics" features a total of 83 artworks, which were selected and displayed at the "Taiwan Fine Arts Exhibition (臺灣美術展覽會)" and the "Governor-General's Art Exhibition (臺灣總督府美術展覽會)" during Japanese rule, shedding light on Taiwan's "new art movement" through the works of the pioneers.

The NTMoFA points out the significance that Kuo Hsueh-hu's "Solitude (寂靜)" and Lin A-Chin's "Southern Country (南國)," which were both displayed at the seventh Taiwan Fine Arts Exhibition (臺灣美術展覽會) in 1933, are on display at the "Revisiting the Classics." The NTMoFA had previously shown the two paintings in 1999.

Kuo's wife Lin A-Chin was born in Dadaocheng, Taipei, in 1915. Deeply inspired by Japanese artist Gobara Koto (鄉原古統), Lin took up painting and became one of the few female artists during Japanese rule. She was active at art exhibitions prior to marriage, and her works were selected three times at the Taiwan Fine Arts Exhibition, including "Canna indica (美人蕉)" (1932), "Southern Country (南之國)" (1933) and "Pudding-pipe Tree (黃莢花)" (1934), respectively.

It was a significant event in the artistic circle that Gobara Koto introduced Lin A-chin to Kuo Hsueh-hu and the two were married in 1935.

In order to support Kuo in his creative endeavor and attend to family obligations, Lin had temporarily suspended her artistic pursuit for more than 10 years. She picked up the brush once again in 1950, and, in 1952, she was awarded the first prize by the Tai-Yang Art Association (台陽美術協會).

The NTMoFA notes that many of Lin's female contemporaries retired from the art scene after marriage in view of the conservative social milieu. To carry out the project of reconstructing contemporary Taiwanese art history, it is crucial to acknowledge the talents and artistic achievements of female artists.

"Revisiting the Classics – Special Exhibition of Existing Works of Taiten and Futen" will be on display at the NTMoFA until April 11.