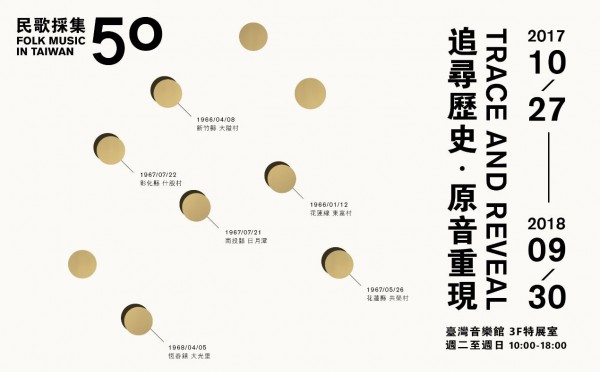 The Taiwan Music Institute will hold a special exhibition from Oct. 27, 2017 through Sept. 30, 2018 to commemorate the 50th anniversary of the Folk Song Fieldwork Movement (民歌採集).

Father Alois Osterwalder (歐樂思神父), who was doing research in Germany at that time, also helped fundraised NT$500,000, which equals to about NT$23 million today, to support the collection movement.

Director Wu Rung-shun (吳榮順) of the National Center for Traditional Arts explained that a "musical enlightenment” culminated in 1967, which in turn boosted public awareness over the search for Taiwan's own culture. Many research projects from this time produced invaluable oral recordings and written text.

Over 500 musicians were recorded and documented during six major fieldwork sessions. These historical documents collected by veteran Taiwanese musicians have left a long-lasting impact on today's music scene and how it incorporates traditional and contemporary elements.

In 2000, the Taiwan Music Institute received the tapes recorded by Hsu during the 1960s movement, and started digitizing the audio files and making copies of the lyrics and notes. Then, the institute interviewed the villages or tribes where folk songs were collected to clarify the significance of each song to its place of origin, and to document the regional development and history of Taiwan's music culture.

The Ministry of Culture hopes to broaden the facilities and professional expertise of the Taiwan Music Institute through the Forward-looking Infrastructure Development Program, and preserve the valuable historical documents in a systematic manner.

Through research, digitalization, and resource-sharing, the Taiwan Music Institute is expected to achieve its objectives of preserving and revitalizing the nation's musical heritage. Most of the documents in its collection are also available upon request for those pursuing academic research.

In addition, Culture Minister Cheng Li-chiun hopes to strengthen and recalibrate the functions of the Taiwan Music Institute to be more in line with the pioneering spirits of Hsu and Shih.

The exhibition will feature cultural relics encompassing reel tapes, journals, manuscripts, and photos as well as interactive installations. It will also hold a series of music concerts and forums to awaken the public's memories and sentiments for one's homeland.