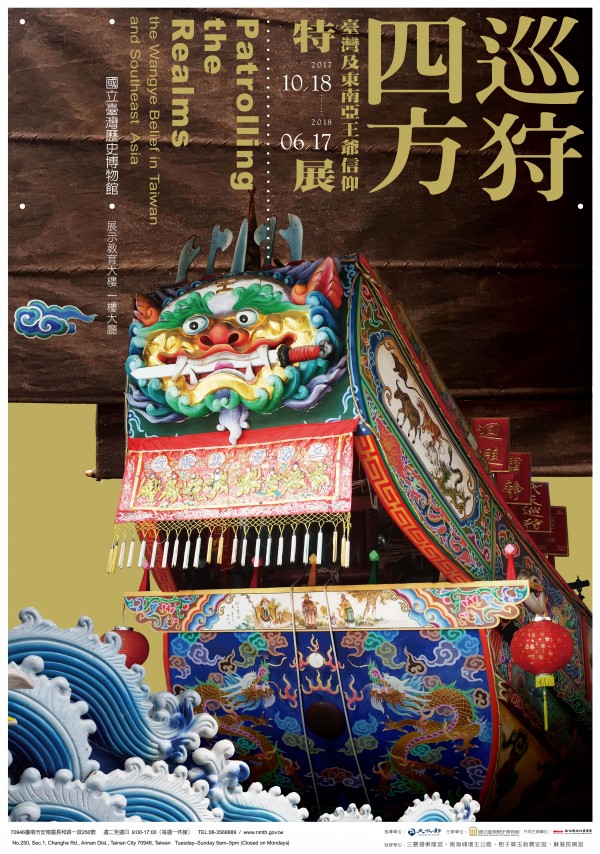 The National Museum of Taiwan History (NMTH) in Tainan will hold an exhibition featuring the Wangye ("royal lord”) sect thriving in Taiwan and Southeast Asia from Oct. 18, 2017 through June 17, 2018.

The Wangye belief, a prevalent folk religion, developed various characteristics based on different societies and economic models as it was adopted across Southeast Asia. The most complete rituals and traditions remain best preserved in Taiwan today.

Co-organized by the Bureau of Cultural Heritage, the exhibition will introduce features of the Wangye sect in different regions of Taiwan and present how the religion diversified and branched out into different types today through images, videos, and cultural relics on loan from temples.

Some highlights of the exhibition include King boats created by craftsmen Hong Quan-rui (洪全瑞) and Hong Ming-hong (洪銘宏), as well as early images of sending off Wangkang ("royal vessel”) in Melaka in 1919 and 1933. The latter were authorized for display by Malaysia's Cheng Wah Keong Temple.

Today, China, Indonesia, and Malaysia also practice the ritual of patrolling on behalf of Wangye. By introducing the culture and meaning behind rituals of the Wangye belief, the exhibition will help the public understand the religious form from a cultural perspective and better appreciate Taiwan's religious heritage.

The exhibition will first explain the multiple surnames and systems of the Wangye belief - as illustrated by a special Wangye statue preserved by the museum - and retell legends and folk stories that were passed down for generations. The complex rituals and ceremonies welcoming the Wangye patrol will also be explained through four sections.

"Preparation of Rituals and Patrol Boats” will showcase folk crafts of wooden King boats and sailors as well as paper King boats with deity statues to present the serious attitude held by those who paid immense effort in realizing such rituals.

"Social Rites and Rituals of the Wangye Belief” will explain the mysterious schedule of the Wangye's mansion by divining with boards, statues, and special tools for deity worship and religious social rites.

"Sacrifices and Rites,” on the other hand, will introduce the rarely seen rituals of the Daoism altar through a showcase of religious instruments collected by the museum.

"Pilgrimage and Sending Off Wangye” will introduce the "White Crane Parade (白鶴陣)” and the "Aquarium Parade (水族陣)” practiced during the pilgrimage in Tainan's Sigang District. The section will also display the goods offered during Wangye's sendoff at the end of the ritual.

In addition, old photos and images will also be showcased to introduce the worshipping of Wangye in Malaysia's Melaka state and China's coastal regions.

The exhibition will also combine maps and images to present region-specific rituals developed in accordance to different geographical, economic, and social constraints. Visitors can also follow the map to visit temples and learn more by scanning the QR code on the side of each display.

‘Patrolling the Realms: the Wangye Belief in Taiwan and Southeast Asia'