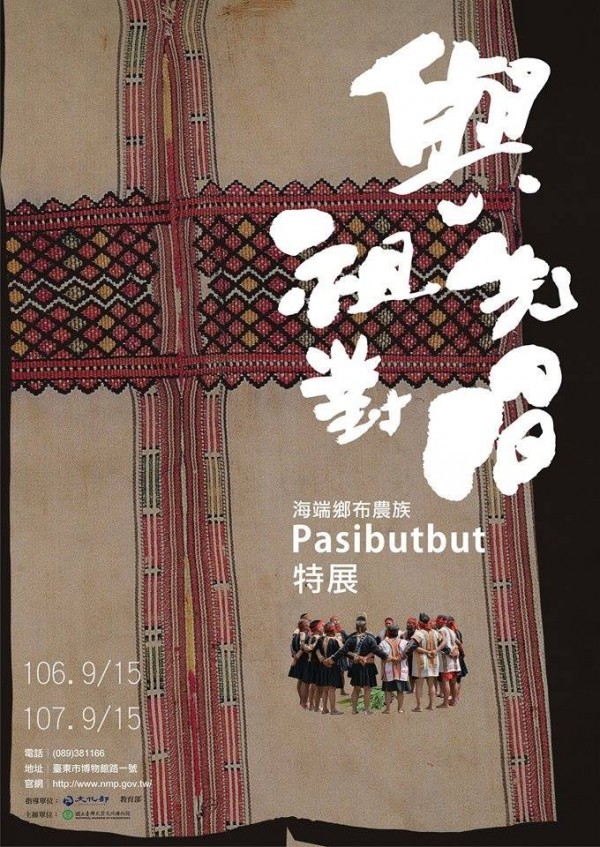 The National Museum of Prehistory will hold a year-long exhibition featuring the Bunun's unique pasibutbut vocal tradition as well as a sound installation by Canadian singer-songwriter Matthew Lien starting from Sept. 15, 2017.

The pasibutbut, an eight-part polyphony, is a prayer for a rewarding millet harvest in Taiwan's indigenous Bunun culture. The unique polyphonic harmonies stunned Japanese scholar Takatomo Kurosawa (黑澤隆朝), who heard it for the first time when he was conducting field work among the Bunun in 1943.

Kurosawa later published a thesis on the pasibutbut at the International Council for Traditional Music in 1953. Citing the unique chords and harmonies of the pasibutbut, which consist of semi tones and notes, the thesis overturned a prevailing music theory stating that chords are composed of monophony and polyphony elements.

After being recognized internationally, the pasibutbut has become a major focal point for folk music studies as well as one of the channels to learn Bunun culture.

The museum has conducted several field surveys and research projects in partnership with the Taitung-based Bunun Cultural Exhibition Hall to understand how the pasibutbut evolved over the past centuries and how it influences the Bunun society.

The exhibition section titled "Pasibutbut” will showcase historical images and cultural significances of such vocal tradition. Tribesmen who participated in recordings and singings of the pasibutbut will also be invited to perform at the exhibition venue on a regular basis.

"Consonance,” a sound art installation based on the pasibutbut, will also be showcased as part of the exhibition. Made of sixteen specially made loudspeakers, the installation will present the pasibutbut performance array and sound resonance in a three dimensional space formed by the installation, allowing the listeners to interact with the unique Bunun sounds.

Lien noted that his idea comes from his admiration of Bunun's eight-part polyphony and his studies of 3D soundscape technology. He started recording the singings of 16 Bunun people with sixteen microphones, and arranged sixteen loudspeakers as a circle to resemble the traditional Bunun performance of the pasibutbut.

Lien hopes the audiences will enjoy the soulful singing by Bunun people as well as learn more about the Bunun culture through the sound installation.

Director Lee Yu-fen (李玉芬) of the National Museum of Prehistory noted that singing and dancing play a major part in the communications and interactions within the Bunun tribe. Moreover, the presentation of singing and dancing also symbolizes the unity of its people and the cultural characteristics cherished by the tribe.

Since 2004, the museum has initiated the Taiwan Aboriginal Singing and Dancing Education program to pass down vocal and dance traditions through collaborating with Taitung's indigenous communities and providing the museum as a venue for aboriginal groups to perform.

Special Exhibition of Pasibutbut of the Bunun in Haiduan Township