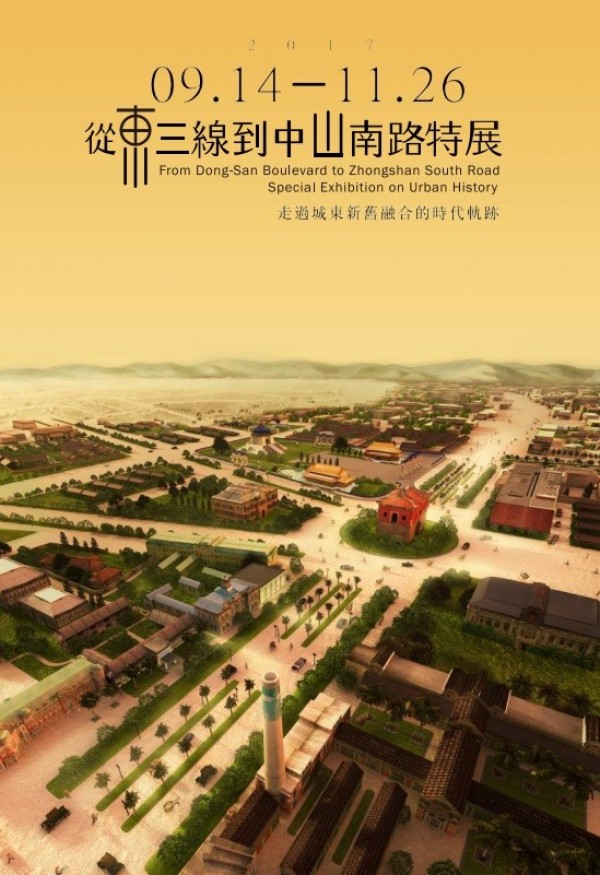 The history of Taipei's Zhongshan South Road will be delineated using photography, virtual reality, and audiovisual displays at the National Chiang Kai-shek Memorial Hall from Sept. 14 through Nov. 26.

"From Dong-San Boulevard to Zhongshan South Road: Special Exhibition on Urban History” will introduce the historic transformation of the capital's east side starting from 1878, when Qing-dynasty Prefect Chen Hsing-chu (陳星聚) oversaw the construction of the Taipeh City Walls.

Taiwan Governor Liu Ming-chuan lit the first street lamp outside Taipei's East Gate a full decade later, only for the city walls to be dismantled during the Japanese colonial era (1895-1945). From the dismantlement sprung forth three lanes, including Dong-san Boulevard that became today's Zhongshan South Road.

As Zhongshan South Road is located where the east-side city wall of Taipeh once stood, its predecessor Dong-san Boulevard served as a border separating several prosperous city districts (also known as "cho”) during Japanese rule. This boulevard then became the "gateway road” along which foreign dignitaries traveled from Songshan Airport to the Presidential Office.

The completion of the National Chiang Kai-shek Memorial Hall in 1980 further cemented the region as the most-known façade of Taipei and home to an integral cluster of government agencies. Moreover, many historic Japanese-era buildings - including the Presidential Palace and Control Yuan - have been repurposed and remain in use today.

To piece together a comprehensive mosaic of memories of eastern Taipei, the organizers were able to secure old photos spanning from the Qing dynasty, the Japanese colonial era, and the Republic of China through the present day through a nationwide call for photos. These photos were then paired up with interviews and oral histories from people who have lived, worked, or dedicated their lives to researching the "old walled city of Taipei.”

Visitors will also be given the opportunity to immerse one's self in the changing landscape around East Gate via a virtual-reality setup, and read up on lesser-known tidbits about Zhongshan South Road, such as its modest but thought-provoking "Path of Literature” that has been inscribed with essays and poems by local writers.

Last but not least, a special display will be dedicated to the region's role in the emergence of Taiwanese democratic awareness. From the Taiwanese Cultural Association and Wild Lily Student Movement to the Sunflower Student Movement, many of Taiwan's social and cultural developments came from voices being heard by the nation's center of political power.

More information can be found at the event website here: http://從東三線到中山南路特展.tw.