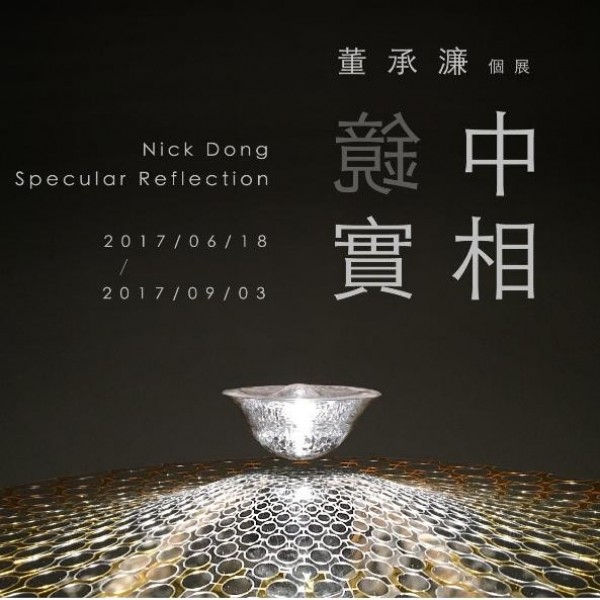 In collaboration with the Asia University Museum of Modern Art, the National Taiwan Museum of Fine Arts will host a solo exhibition by Nick Dong (董承濂) from June 18 through Sept. 3.

Dong is an Oakland-based Taiwanese conceptual artist and metalsmith. He creates mixed-media artworks that share his observations, research, and exploration of the world. Each piece is crafted with the intention of augmenting the viewer's visual experience and aesthetic appreciation.

Dong's artworks have been showcased by many museums and galleries in Taiwan and the U.S. He was also chosen by the Smithsonian as one of the featured artists in its "40 under 40” exhibition in 2011.

"Specular Reflection” is an extended edition of Dong's previous solo exhibition "Cosmic Dance,” which attempts to convey the mysterious relationship between perception and reality in Buddhism.

Dong's artworks will be hovering subtly in the air, floating along with music in the world of lights and colors he created for the exhibition. Visitors will explore the question of whether an art object could serve as a medium for awakening the human mind.

Based on concepts from the theory of relativity and quantum mechanics, Dong will also explore the spiritual concepts of life, emotion, and desire in a physical universe through a combination of artistic and philosophic approaches.

Director Hsiao noted that Dong employs concepts from quantum mechanics and fiber optics to create interdisciplinary installations that present unique ambiance, adding that the essence of Dong's art creations lies in their ability to interact with exhibitiongoers and provoke thought.

Jiang noted that Dong's observation and concentration skills have combined well with his meditation experiences, which enabled him to incorporate physics and Buddhism in his works and transform his beliefs on the universe, religion, and life into art.

Director Lee pointed that while Dong's works embody abstract ideas from religion and philosophy, there remains a touching and human quality about his art.

Lee also thanked NTMoFA for providing a stage for young artists, and hoped that the university and museum could create new platforms together, introduce more talented artists to the public, and enhance the art scene in central Taiwan.